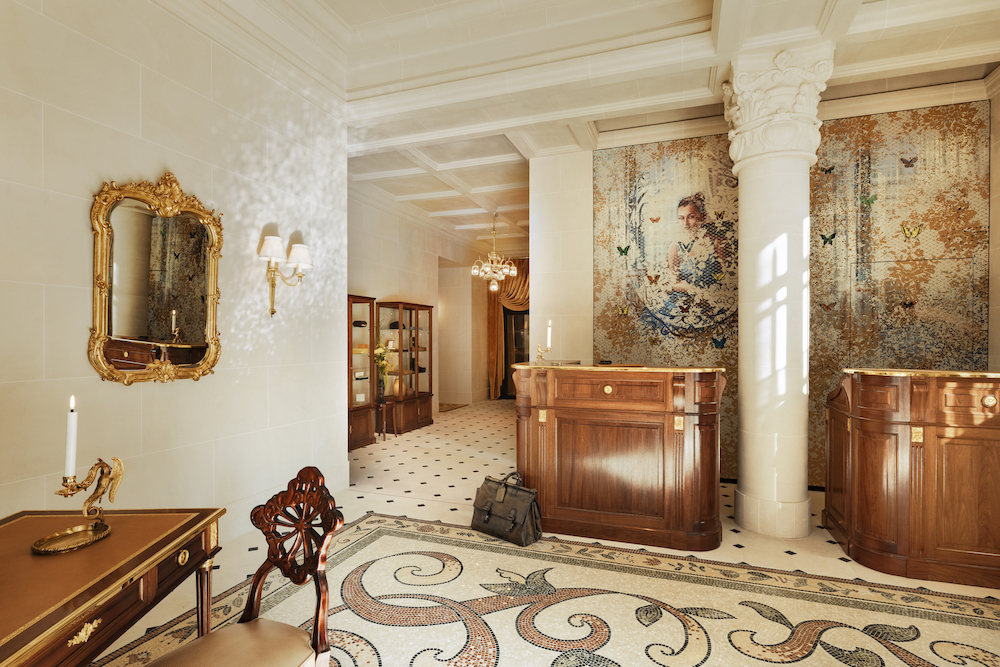 There has been a spate of Paris luxury hotel openings over the past year.

Each one adds something extra to the capital, giving visitors even more choice to explore and to enjoy the finest French hospitality.

We take a look at each exciting new hotel and what they offer discerning guests.

Despite the ongoing challenges of the Covid-19 pandemic, 2021 saw something of a luxury hotel boom in Paris. Most of the new properties opened in the 1st arrondissement (district).

This is the part of the city that’s already home to the legendary Ritz hotel, one of the most famous.

The 1st district also contains three of the city’s 11 ‘Palace’ status hotels – the Meurice, the Mandarin Oriental, and the Park Hyatt.

Of course, Paris has its fair share of 5-star hotels. However, the Palace status properties go even further.

Established over a decade ago, this category recognizes qualities that embody French standards of excellence.

Not only is the Palace status a recommendation for guests to stay in these luxurious hotels. It also increases the property’s profile, especially on the international hospitality scene.

Earlier this year, a new hotel also opened in a real palace, the Versailles Palace to be exact. We wrote about this property fit for royalty back in the summer.

Welcome to the Castiglione

2021 marked the arrival of four new Paris luxury hotel openings within the city.

The first was the Castiglione, a sister hotel to the fashionable Hotel Costes, but offering a very different aesthetic.

The original Costes has been called an ‘anti-hotel.’ It bucked the trend in 1995 with its lushly decorated interiors by Jacques Garcia, rejecting minimalism. Its restaurant has long been a favorite spot for the jet-set and international celebrities.

The new sister property, designed by Christian Liaigre, is a total contrast. Bright, open and airy, it is set on rue de Castiglione, in the 1st arrondissement.

The two properties are even connected by a secret door.

Inside the new sister hotel

While the main Costes is warren-like with bordello-inspired bedrooms, the new hotel is modern and sleek.

The 38 rooms and suites have an air of sophistication, and range in size from 60m² to 600m². They include a range of lofts, a touch of New York style in Paris, and all dazzle with bright white walls and fabrics.

Guests can use the facilities of the main hotel, only now there is a wider choice of contemporary accommodation to choose from.

The Castiglione is certainly one of the most surprising Paris luxury hotel openings of the past 12 months.

Seven years in the making, the Cheval Blanc Paris is part of the Samaritaine development, an already popular meeting place for Parisians.

We reported on the main opening in July last year, while the hotel opened early in September.

Its location is incredibly central. It’s part of the Art Deco Samaritaine department store, overlooking the Pont Neuf and Seine. The Louvre is to the left, the Notre-Dame to the right, while the Marais is close by.

For this hotel, the keyword is luxury. And it really does deliver it.

There are 72 bedrooms in total at the Cheval Blanc Paris, almost all of which have views overlooking the Seine.

The hotel also boasts a huge 30-meter swimming pool, said to be the largest in Paris. This is part of the Dior spa, another truly luxurious feature.

If money really is no object, the Cheval Blanc offers something quite special that’s hard to find elsewhere. The top floor Quintessence Suite is a duplex spread over 7000m² with four en suite bedrooms for guests, and its own private swimming pool.

Gourmets will relish four brand-new restaurants. They are a café and cocktail bar, a brasserie, and Langosteria, the first eatery from this Italian brand anywhere in France. Finally, there is a new restaurant called Plénitude, headed up by three-Michelin-starred chef Arnaud Donckele.

We first reported on this burgeoning new project in 2020.

Since late October last year, the hotel is open and welcoming guests, in the former Post Office building.

The Madame Rêve Hotel has 82 rooms and suites offer breathtaking views over the monuments of Paris, including the Eiffel Tower.

There are two new restaurants, open to guests and the public. The Madame Rêve Café offers a Mediterranean-influenced menu. While La Plume is a panoramic restaurant serving up Japanese-French fusion dishes, headed by Executive Chef Benjamin Six.

A new roof garden at the Madame Rêve

But undoubtedly, the highlight of the new hotel is its covered roof garden, home to more than 100 species of plants and trees. This really is a piece of luxuriant bliss in the heart of the city.

Opened in October, reviews for this 5-star hotel are already saying things like “a dream come to life” and “Paris’s most romantic hotel.” Time will tell if the next wave of tourists and travelers will agree, but the first signs look promising indeed.

Welcoming the first guests through the doors on December 2, the Bulgari is the latest of the Paris luxury hotel openings.

It’s the first Bulgari hotel in France, set in Paris’s prestigious Golden Triangle on Avenue George V. This is in the city’s 8th arrondissement.

Italian architecture studio Antonio Citterio Patricia Viel, who designed the brand’s six other international hotels, has worked on the latest development. It aims to fuse French luxury with Italian style.

This is evident in the hotel’s exciting new dining venue Il Ristorante, headed by three Michelin-starred Italian chef Niko Romito. It offers a blend of contemporary and classic dishes from his homeland.

But to satisfy a variety of palettes, local bistro fare such as French onion soup is also on the menu.

A vibrant new bar, and even a ‘secret garden’ with room for 40 diners are other standout spaces.

Luxurious facilities at the Bulgari

A grand 1000m² duplex penthouse with its own private roof garden is the finest suite the hotel has to offer. But there are a further 76 luxurious rooms to choose from, 75% of which are suites.

Many offer breathtaking 360° views over the rooftops of Paris, thanks to huge picture windows.

Other hotel facilities include a high-tech gymnasium, and a spacious subterranean spa covering 1300m² across two floors with a full-length 25-meter swimming pool.

A luxury hotel is one thing, but nothing quite compares to owning your own apartment in Paris.

If you would like to talk to one of our expert realtors, feel free to get in touch with the team at 56Paris.