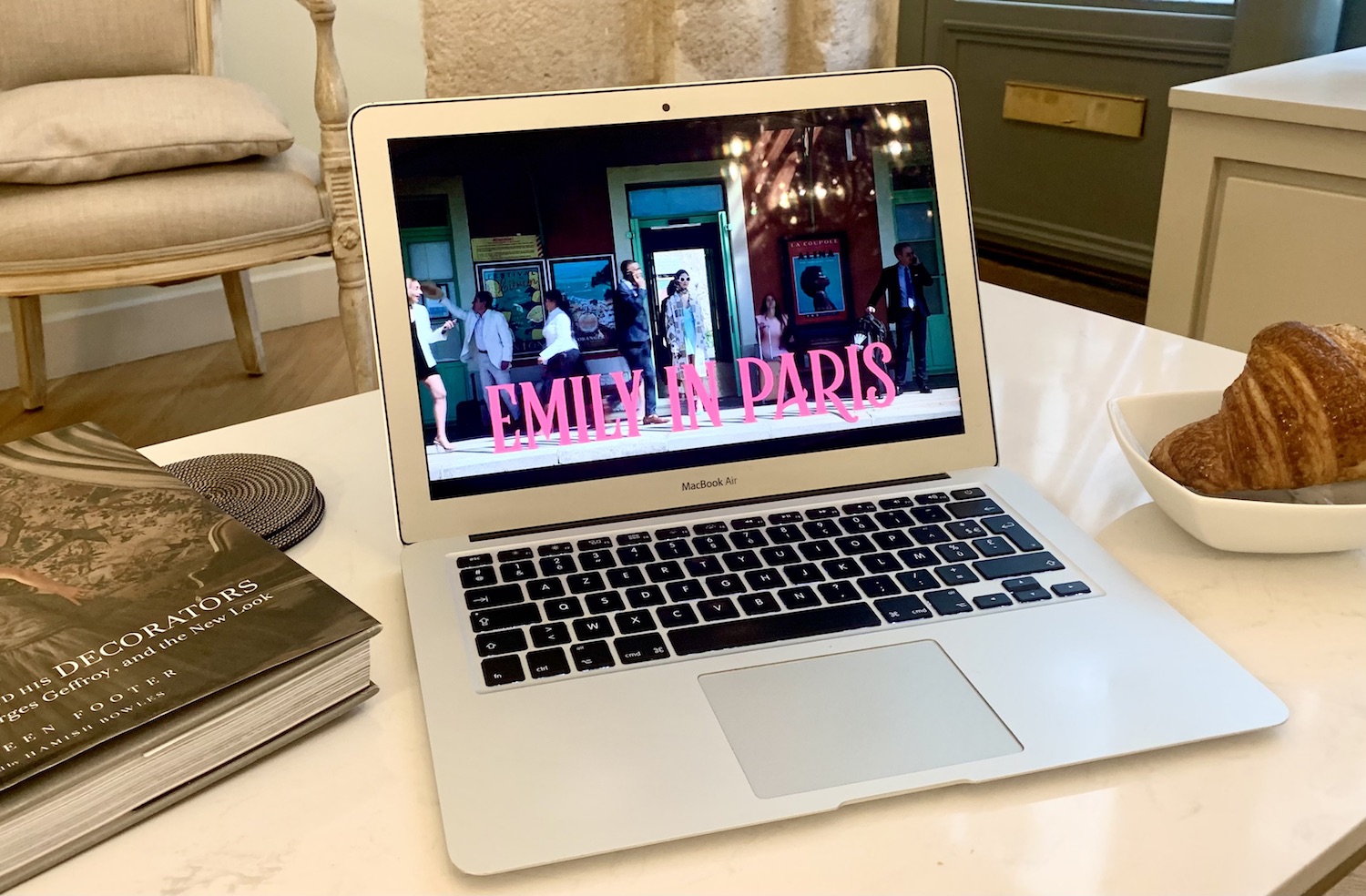 Following the release of season 2 on Netflix, we’re taking another Emily in Paris real estate tour.

There are even more Parisian landmarks featured this time. It’s a real showcase of the architecture and beauty of our capital.

From Emily’s Latin Quarter apartment to the Palace of Versailles, here are the locales the world is watching in the new episodes.

The first season of Emily in Paris debuted in October 2020. With the lockdowns and restrictions of that year, it provided a welcome escape for many viewers around the world.

In fact, 58 million households streamed the show in its first month alone.

While some consider its take on Paris cartoon-like, many find it a charming and infectious show.

The second season continues with both Parisian and American caricatures, but also the fun.

Our last Emily in Paris real estate tour features both Montmartre and Luxembourg Gardens. But in season 2, one of the most striking locations is La Samaritaine.

Emily attends a perfume-themed party called ‘Scents and Sensibility’ at the revamped apartment store in the 1st arrondissement (district).

The striking Art Nouveau architecture is a magical backdrop to this episode, with the iconic glass roof and peacock fresco all on screen.

The show’s creators have been quick to use the location – it only opened last summer following a 16-year closure. We reported on the reopening in this blog.

It’s also home to an exciting hotel, Cheval Blanc, just one of the Paris luxury hotel openings over the past year.

Emily’s best friend is Mindy, a talented singer who is running from her previous life in China.

As the second season starts, Mindy is working as a restroom attendant and singer at a cabaret club.

In real life this is Roxie, a supper club near the Champs-Elysées in the 8th arrondissement. It offers one of the largest selections of whiskies and bourbons in Paris.

Nearby, we have this top floor one bedroom apartment, currently available to rent.

A major storyline running through season 2 is the love triangle between Emily, chef Gabriel, and his on and off girlfriend Camille.

The gallery where Camille works is real – Perrotin Paris is a modern art space housed within an 18th-century mansion in the Marais, not far from the Picasso Museum.

We recently offered for sale an apartment in this very building, where the lovers have a memorable scene on the stone and wrought-iron stairs.

Before her dinner party in the third episode, Emily and Gabriel go shopping at the Marché d'Aligre. It is here they get caught in the rain and grow closer.

A popular foodie destination, this lively market is in the 12th arrondissement near the Bastille. A fixture of Paris for two centuries, some call it the best market in the city.

Close by is this renovated duplex apartment which offers two bedrooms and an office or guest room. It’s an ideal pied-à-terre, primary residence, or rental investment in a sought-after location.

The Palace of Versailles

20 kilometers to the west of Paris, the Palace of Versailles receives around 7 million visitors each year.

Although it’s Emily’s visit during the season finale that makes her one of the most prominent visitors! The fashion show takes place in the Hall of Mirrors and is a highlight of the season.

Dating from the time of Louis XVI and Marie Antoinette, the legendary palace is now a World Heritage Site.

Last year, a new hotel opened its doors within the palace itself, offering an exclusive new place to stay. It’s something we reported in this blog at the time.

Last but by no means least on our tour is Emily’s very own apartment, which gets a fair bit of screen time throughout the series.

The exterior is on the Place de l'Estrapade in the 5th arrondissement, in the heart of the Latin Quarter, between the Pantheon and the Luxembourg Gardens.

A converted maid’s room, it’s a two-room apartment on the fifth floor without an elevator. And it’s certainly cozy, especially when Mindy moves in and the friends share the bohemian living room and hippie-styled bedroom.

But the layout and feel of the apartment are authentic. In contrast to Emily’s often extravagant and fashion-forward outfits, the property is actually one of the more realistic aspects of the show.

With a third and fourth season of the show already commissioned by Netflix, we can expect to see even more of Paris on the small screen.

So look out for another Emily in Paris real estate tour, when the next season starts streaming.

If reading about the locations has inspired you to enjoy a taste of the Parisian lifestyle, feel free to contact the experts at 56Paris today.