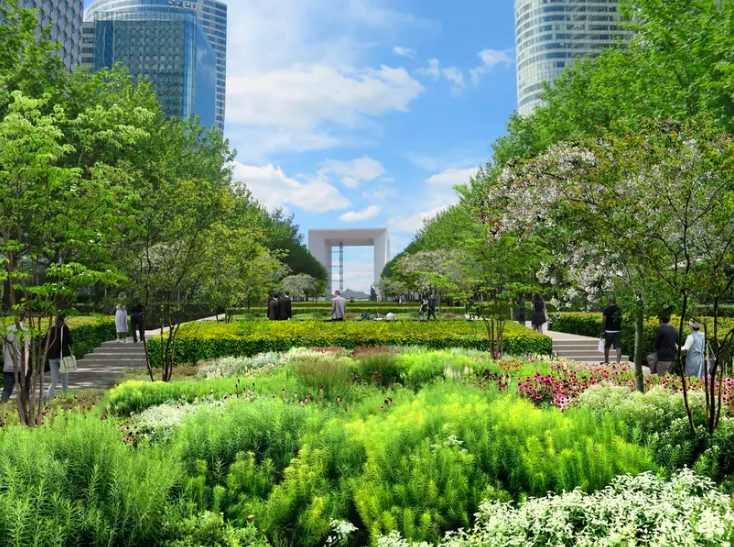 By halving greenhouse gas emissions, the scheme is leading the way for more sustainable city business districts around the world.

We take a guided tour of the newest area adding to the greening of Paris.

La Défense is the major business district of Paris. Set away from the older parts of the capital, it’s located three kilometers (1.9 miles) west of the city limits.

The district contains 72 steel and glass buildings, including 19 skyscrapers. These are the tallest and most modern constructions in the Paris area, quite separate from its older neighborhoods.

In total, this area has over 3.5 million square meters of office space.

Like the business and financial districts in every major city, La Défense has a large carbon footprint. More than twice of this comes from ongoing construction work, than from the operation of the buildings themselves.

But these new plans to greatly increase the number of trees and vegetation in this part of Paris will slash greenhouse gas emissions by 50% over the next eight years.

The original plans 50 years ago

You could say the idea for a post-carbon La Défense is nothing new.

Back in 1972, it was a young, growing business district. But even then, the intention was to make the area greener, and more in line with nature.

Dan Kiley, an American landscape architect and garden designer, was responsible for the half-mile stretch known as the Dalle Centrale, between the Seine river and the Grand Arche.

His modernist vision for this part of the district included water fountains, shaded seating areas, earthen bocce courts, and open-air cafes. His intention was for it to be greener, something lost in the five decades since.

The new plans are a return to the original vision of the business district, but even better, and even greener.

Plans for the post-carbon La Défense

So what will the new, greener La Défense look like?

At the moment, around a third of the pedestrianized area has vegetation. The new landscape architect, Michel Desvigne, promises to increase this to 60%.

On the esplanade, 450 plane trees remain from the original plantings of 1972. Many more mid-height trees are being added, along with hedges of honeysuckle and myrtle, plus large swathes of flowerbeds filled with iris, lilies, euphorbia, and periwinkle.

In spring and summer, Japanese cherry blossoms and dogwood will add color.

Green islands of grass lawn complete the area, usable for relaxation and lunches. While more ponds and water features aim to lower the summer temperatures for those sitting in the gardens.

In total, the new green areas are 600 meters long, covering five hectares, offsetting emissions from the business district, and offering a habitat for birds and insects in the city.

The greening of Paris continues

There are other projects underway, all boosting the greening of Paris.

One is the construction of new sustainable wooden office buildings in La Défense, adding to the current plans to lower the carbon footprint. We reported on this project in this blog last year.

Other green projects are the eco-friendly restoration of La Samaritaine,

and Mayor Anne Hidalgo’s plans to plant urban forests ahead of the Paris 2024 Olympic Games.

All are contributing to a more eco-conscious Paris. A more sustainable city for the future.

We are here to help

Interested in any other aspect of the Parisian property market, perhaps buying, selling, or renting an apartment? Please feel free to get in touch with the team to see how we can help.