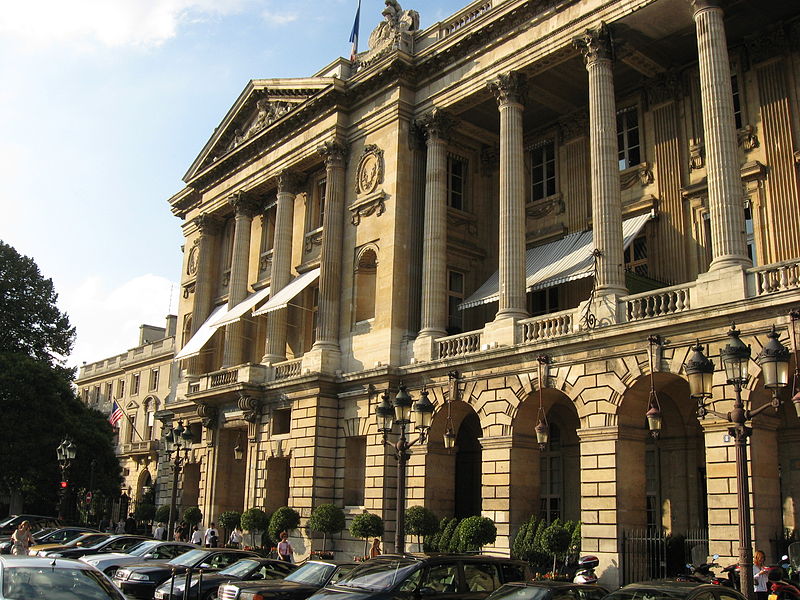 The long awaited Hôtel de Crillon reopening in Paris took place yesterday. The hotel closed four years ago for extensive renovations. French newspaper Le Figaro reports that the work was initially slated to last two years. The magnificent building is located at 10 Place de la Concorde, at the foot of the Champs-Elysées. Rooms at the hotel overlook the Seine, the Tuileries Gardens, and the National Assembly.

The Crillon reopening offers 81 rooms, 33 suites and 10 signature suites. Karl Lagerfeld, the renowned Creative Director of Chanel, designed two of the suites. They have canopy beds and one includes a black and white marble bathroom with a two-ton bathtub.

Forbes magazine reports that room rates range from 1,200 to 32,000 euros per night. It now competes with the Ritz and the George V, the most expensive hotels in Paris. The Bernstein suite offers stunning views of the place de la Concorde. It is offered at between 20,000 and 25,000 euros per night. The suite is named after the composer Leonard Bernstein, who was a frequent guest.

Crillon Reopening – Back to the Future

Not for nothing was the Crillon reopening four years in the making. The goal was to preserve the architectural beauty of its 16,750 m², while modernizing it on both a practical and aesthetic level. Yet some portions of the hotel have been reproduced exactly as they were.

“The restoration of the floors of the historic lounges and some large suites and rooms have taken time because they are identical” said Marc Raffray, the hotel’s managing director. “The facade and the reception rooms are registered landmarks.” 147 artisans worked to restore the gilt moulding, paintings, mirrors, and no less than 600 materials. These included 40 different kinds of marble.

Two suites were newly furnished, but with a distinctly 18th-century aesthetic. One is the Duc de Crillon Suite, named after the mansion’s first Crillon occupant. The other is the Marie-Antoinette Suite, adjacent to the salon where the the French queen took piano lessons,

But the hotel director says the Crillon is not meant to live in its grandiose past. “We want to be humble, approachable and non-intimidating,” he said. “Instead of having an air of formality, our staff will greet everyone with warmth like friends.”

Why the Full Scale Renovation?

The rebirth of the Crillon is a bid to gain “palace” status. Recent new arrivals in the market have increased the competition. These include the Peninsula, the Shangri-La and the Mandarin Oriental. The Ritz provides another example of a recent full renovation of a grand Parisian hotel.

Mr. Raffray told The New York Times that the property previously had no central air-conditioning. Most guests cooled themselves by opening the windows or using fans. The hotel is now fully air conditioned.

The hotel did not have a swimming pool either, unusual for a hotel of its caliber. The new pool’s glass ceiling looks up to a garden with 35 varieties of plants and trees in what was once an unused courtyard.

Around 800 people were behind the renovation. According to the Robb Report, roughly $1.8 million was spent on renovation in each room. Forbes reports that the total cost reached 200 million euros.

The building started out as a royal residence. King Louis XV comissioned construction of the Crillon in 1755. The architect was Ange-Jacques Gabriel.

In 1788 the Duke of Crillon, François Félix Dorothée Des Balbes de Berton de Crillon bought it. But it was confiscated shortly thereafter by the government of the French revolution in 1791. Eventually the building was returned to its owner, whose descendants lived there for more than a century.

It only became a hotel in 1909. The building first underwent a two-year refurbishment under the supervision of noted architect Gabriel-Hippolyte Destailleur. The hotel changed hands several times before Saudi Prince Mitab Ben Abdalah ben Abd al-Aziz Al Saoud bought it in 2010 for 250 million euros.

Rosewood Hotels and Resorts is now managing hotel operations. Rosewood’s president, Radha Arora, played a major role in his company’s deal to manage the hotel. For him the project has a personal connection. He lived in Paris for part of his childhood and worked as a busboy at its Les Ambassadeurs restaurant when he was 17.

History Made at the Crillon

On February 6, 1778, the building was the venue for the official signing of the first treaties between the newly founded United States and France. Benjamin Franklin met French diplomat Conrad Alexandre Gérard de Raynevalto conclude the French-American treaty. It recognized the Declaration of Indepenence of the United States and established a trade agreement.

Gen. John J. Pershing of the United States Army and Franklin D. Roosevelt, the assistant secretary of the United States Navy, were guests in 1918. President Woodrow Wilson stayed there during the Paris peace conference in 1919. President Wilson, Prime Minister David Lloyd George of Britain and foreign delegations met numerous times at the hotel in early 1919. They drafted the covenant of the League of Nations in one of its salons.

In 1909 American guest Susan Dwight Bliss couldn’t bear to leave the Crillon behind when she returned to New York. She bought an entire boudoir of the hotel and shipped it to her home in Manhattan. Ms. Dwight Bliss donated the boudoir to the Metropolitan Museum of Art in New York in 1944. It can be visited there today, and is known as “the Crillon Room.”

The Crillon was the historical venue of the international debutante ball from 1992 to 2012. The ball was mentioned in Forbes‘ list as one of the world’s 10 best parties.

Real Estate in the Vicinity

What would it cost to have a home of your own in the neighborhood ? The latest figures from the Paris Chamber of Notaries show an average net seller price of 14,510 €/m². This represents a 23.5% increase over the last five years.

Yet exceptional properties often sell well above the average price. A top floor triplex with sweeping views at the nearby Rond Point des Champs-Elysées is currently on the market at 32,307€/m².

Please contact us to learn about investing in real estate in Paris.