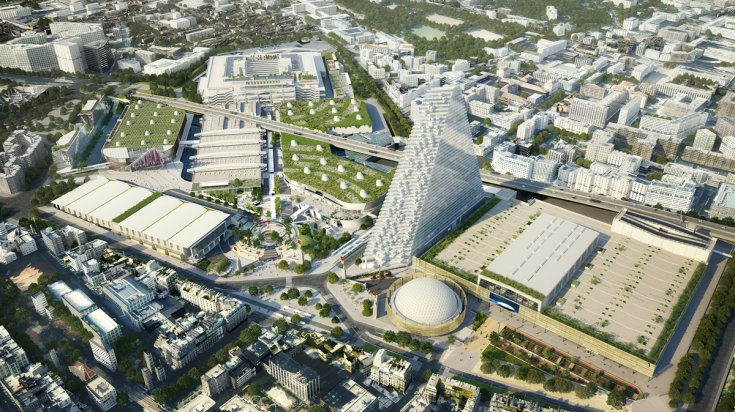 After 13 years, the Paris Triangle Tower project seems to be advancing once again.

Will this dazzling new skyscraper become a reality, and rise up in the south of the capital?

A host of new reports suggest that it will, but there are still four more years to wait.

The newest skyscraper in Paris

It has taken so long, many thought that perhaps it was nothing but a fairy tale.

But now it seems the Paris Triangle Tower project will finally see the light of day.

Back in 2008, Bertrand Delanoë was still Mayor of Paris and announced the building of a rare Parisian skyscraper, the 'Tour Triangle.'

The tower was instantly controversial. It’s set to be an assuredly modern structure in a city renowned for its historic, period buildings. Privately funded to the tune of €700 million, the tower’s designers are Swiss architects Jacques Herzog and Thierry de Meuron.

The pair famously designed both the ‘Bird’s Nest’ Beijing Olympic stadium, and the Tate Modern in London.

For their French pyramid, the plan was to give Paris a similar modern landmark, one that is distinctly 21st century.

But Paris is notoriously conservative when it comes to new architecture. This goes some way to explaining why progress on the tower has taken longer than a decade.

Called a 'soap opera' over the past 13 years, the Paris Triangle Tower project may not be that dramatic, but its history is certainly a turbulent one.

Paris has not seen a building of this size since the 210-meter-high Montparnasse tower, back in 1972.

Getting the project approved required modification of urban planning regulations. Essentially, this permitted such a tall building, but only in the outlying Parc des Expositions sector.

After this, the project never got off the ground. Work was initially intended to take place in 2011. But when the date came around, things had gone quiet.

Controversial from the start, the Greens always pushed against the plans. By 2014, a collective of associations formally filed an appeal. Ultimately, it was unsuccessful, although the project then dragged through various planning dilemmas, including a rejection from the Council of Paris.

Plans required adjustments, including the addition of a hotel inside the tower, and the council finally gave it the green light in 2015. We reported on the story in this blog.

A date of 2020 was set, obviously delayed by the Covid-19 pandemic. Now, the latest reports indicate that the first stone will be laid by the end of 2021.

When it’s finally built, the tower is going to be the most prominent landmark in the 15th arrondissement (district) of the capital, within the exhibition park of Porte de Versailles.

This area is at the city limits, on the southern side of Paris.

With a trapezoid base, the shape is irregular. Looking out from central Paris, it will appear as a thin tower. But from both the east and west its wider triangular shape becomes apparent.

When looking back at the controversy the tower has generated, it is interesting to note this height. While Paris is a ‘horizontal city’ with very few tall structures, the new pyramid is still smaller than the Tour Montparnasse, and of course the 324-meter Eiffel Tower.

Inside the pyramid will be a 120-bedroom hotel and apartments, plus a large number of new offices.

When pushing the plans through the final stages, the current Mayor of Paris, Anne Hidalgo, lessened opposition to the project by ensuring other parts are set aside for childcare and cultural spaces too.

Construction of the pyramid tower

To construct the tower, two companies have come together.

Commercial real estate firm URW is entering a joint venture with AXA IM Alts. They share the investment, development, and overall ownership of the building.

The Besix construction group is taking on the work. They are also building the city’s new Saint-Denis Pleyel station.

Delivery of the tower is scheduled for the first half of 2026, after 50 months of construction. There will be a small hiatus in the summer of 2024 during the Paris Olympic Games.

They say good things take time, but will this Parisian pyramid be worth the wait? Only time will tell.

Here to assist with your property queries

If you have any queries about the ever-changing property market here in the French capital, please don’t hesitate to get in touch with the team at 56Paris.