Your Guide to Renovating a Paris Apartment

Your Guide to Renovating a Paris Apartment 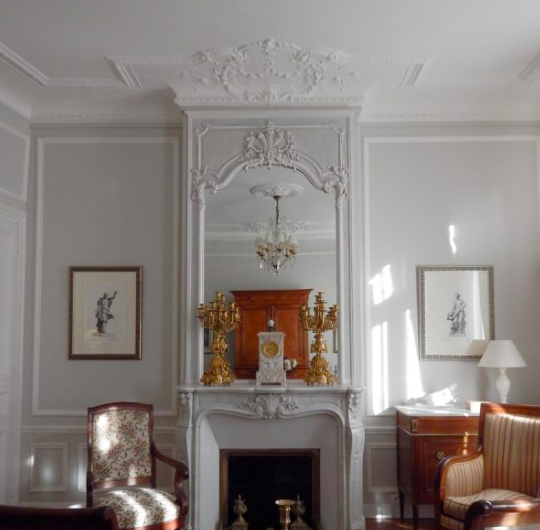 What is involved in renovating a Paris apartment? American buyers Jim Braude and Rick Flinn have restored several. Their latest project – a historic Belle Epoque apartment in Le Village Saint-Paul of the Marais quartier of the 4th arrondissement – is perhaps their most stunning success to date.

Their goal was clear: “We wanted to honor the historic context of the architecture and interior design so that if one of the original inhabitants returned, they would recognize their old home.

“They would be surprised and delighted by the far more comfortable and luxurious bathrooms and kitchen, and the better lighting, heating and air-conditioning.”

Did they achieve this? See for yourself…

Here, Jim and Rick share with 56 Paris Real Estate their experience and tips for renovating a Paris apartment

Your apartment on rue Beautreillis was in need of a major revamp. What potential did you see and how daunting were the renovations?

The apartment had been neglected for decades, and only minor modernization had taken place since its construction.

Happily, all of the original decorative architectural elements and most of the original floors were intact. It was easy to imagine all these elements revived. Bringing the plumbing, wiring and heating systems up to date, while preserving all this, however, would be a challenge, we knew.

Can you describe the building, its architecture, its history and its area?

The apartment is in the Village Saint-Paul, an intimate subset of the historic Marais. Two short blocks in one direction is the most venerable square in Paris: the Place des Vosges, and three blocks south is the Seine and the Île Saint Louis. Other close neighbors are the Place de la Bastille and the Picasso Museum, along with many other historic sites.

The building was constructed in the first few years of the 20th century on the site of the medieval palace of Saint Paul, a long lost complex that had been replaced in the 16th and 17th centuries with large town houses. Two of those ancient townhouses were demolished to build the large three-wing structure at 17-19 rue Beautreillis.

The architecture reflects the lingering taste of the Belle Epoque, with its ornately carved limestone decoration. The interior courtyard is less formal in buff brick with glazed terracotta accents. Behind the building are tennis courts and playgrounds.

When the building was erected, this open area was the site of a bronze foundry, and the Metatal family, its owners, constructed the residential building for themselves.

Our apartment is one of the three wings that comprised the original owner’s grand apartment. Tour groups stop daily to admire the facade of the building, not so much for its architectural beauty as for the fact that the rock star Jim Morrison spent his last months living in the building.

Describe the size of the apartment and its layout and outlook.

The apartment is 123.5 square meters. The long axis faces a vine-covered interior courtyard looking over tennis courts. The front bedroom has a large window on rue Beautreillis, and the kitchen window, facing east, is flooded with morning light. Two bedrooms with their en suite baths and the laundry room/half bath are located down a hall on one end of the apartment. On the other end is a large salon, kitchen and third bedroom. This, with its private bath, is perfect for guests.

This wasn’t your first remodeling project, so what had you learned from past renovations?

This is the seventh project we have undertaken over the past 15 years. Each apartment has had its own unique potential and challenges, depending on the age of the building, and that has ranged from 115 to 400 years old. We’ve learned about building techniques through the centuries, and how best to adapt modern technology to historic structures.

How did you set about prioritizing the work scheme?

We began by interviewing three contractors and chose one who came highly recommended by friends.

Plans kicked off with basic utilities upgrades and structural changes. The original wiring and plumbing was replaced and several walls had to be taken down and the ceilings reinforced with hidden beams so that we could alter room layouts.

The kitchen and bathrooms had to be completely gutted and rebuilt. Fortunately, we were able to salvage original tiling and reinstall it in the new kitchen.

Several walls had to be removed to reconfigure the kitchen and a bedroom and bathroom, and some original doors had to be moved to new locations, or re-opened where they had been sealed.

After this basic work, we either restored or replicated original decorative elements, including doors, woodwork and ornamental plaster.

All of the original windows were replaced with modern replicas to meet contemporary energy efficiency standards. Floors were repaired and refinished, and in the reconfigured areas that originally had no decorative moldings, new ones were installed to match the originals. Finally, multiple coats of paint were applied after extensive repairs to the old plaster walls and ceilings.

Each room had its own unique architectural features, such as decorative plaster cornices, boiserie (carved wood paneling), marble mantels and oak flooring, and we were able to preserve and restore all these elements.

What difficulties and challenges did you meet during the restoration?

Vigilant neighbors alerted the syndic (the company responsible for management of the entire building) that large beams were being brought into the apartment. This precipitated a visit from the syndic’s architect who demanded to see architectural and engineering drawings for the structural alterations. Anticipating just such a visit, I had all the necessary documentation in hand and so the work went ahead without interruption.

Our main challenge was keeping the contractor on schedule, which proved an impossible task. He promised a three-month time frame, but that stretched to seven months, and total completion took a full year. In the end, the final results were excellent though.

Can you describe any wonderful surprises or finds you made during the work?

Most exciting was the discovery we made when a bedroom wall was being repaired. It turned out that when the original almost 400-square-meter apartment had been subdivided after World War II, a door between two bedrooms had been sealed off with a rough masonry wall. During the repair work, the original mirrored door was uncovered! We have re-used it in another room.

On a practical level, we were able to install an efficient central air conditioning system by using one of the large air wells that existed to provide light and ventilation to an interior hallway.

How did you source the furniture and fittings in Paris and was this simple to do?

Having furnished and decorated numerous apartments in Paris over the past 15 years, I have learned where to find sturdy and beautiful antiques at surprisingly low prices. More portable items such as linens were brought from the US where prices are often lower than in France.

Did you set a budget for the project and stick to it?

In the end, we spent less than projected, even with several unforeseen additions to the scope of work.

What have you enjoyed most about undertaking this particular project?

Seeing the apartment revived and brought to its full potential in comfort and beauty, and in sharing that with family and friends.

What advice would you give other would-be buyers in Paris who are considering taking on a similar restoration project?

Quite simply, if you cannot plan and supervise the work yourself, find someone with the skills and taste you trust to realize your dream.

Click here to see some of the other properties Jim and Rick have renovated.