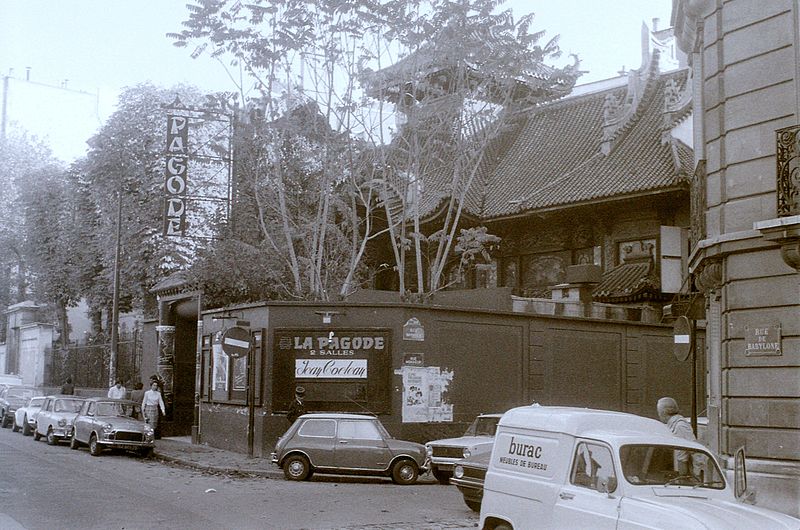 The landmark Paris cinema La Pagode (The Pagoda), hidden away in the 7th arrondissement (district), has closed indefinitely.

The listed building, which dates back to 1896, is a superb replica of an oriental pagoda, complete with a Japanese tea garden.

It showed its last film in November 2015 after a long-running dispute between its owner, Élisabeth Dauchy, and its tenant, David Henochsberg, director of Étoile Cinémas.

Its contents were put up for auction in February, to the distress of its many art-house cinema fans.

The sale raised over €80,000. It included its two historic 35mm cinema projectors but happily not its 400 plush red seats. None of its historic architectural décor was sold, however, such as the elegant sculptures in the garden or the golden eagle that overlooks the main auditorium.

The ornate copy of a Japanese pagoda was commissioned by François-Émile Morin as a wedding gift to his wife at a time when Japonica was à la mode.

Morin was the owner of the nearby famous department store Le Bon Marché. He ordered many of the building’s parts, including delicately sculpted wooden beams and panels, to be brought over from Japan.

La Pagode was first used for high-class Parisian soirées. It opened in 1931 as a cinema which quickly became popular for its screening of avant-garde films.

Temple Of The Seventh Art

During the 1960s, it shone as a hub of high cinematic art, promoting the classics of the New Wave generation, including Jean Cocteau, François Truffaut, Jean-Luc Godard and Eric Rohmer.

In 1972, it was managed by the famous French filmmaker Louis Malle.  He modernized the cinema by creating a second auditorium in the basement, and renovated its façade. He also lovingly recreated its romantic Japanese garden and tea room, which is also now a historic monument.

Up until its closing, La Pagode was drawing in more than 100,000 film-goers a year. It hosted movie master classes, festivals and evenings with visiting directors in the original Salle Japonaise (Japanese Salon), with its red plush seats and oriental snake light fittings.

One of the many delights of living in the French capital is the chance to see its many eclectic and historic architectural gems.

At 56Paris Real Estate, we’re particularly sad to see this gorgeous Parisian landmark close its doors. We hope that its future owners will preserve its unique beauty and allow the public to enjoy it once more.

To find out about buying a period property in Paris near La Pagode or elsewhere, you can contact us here.