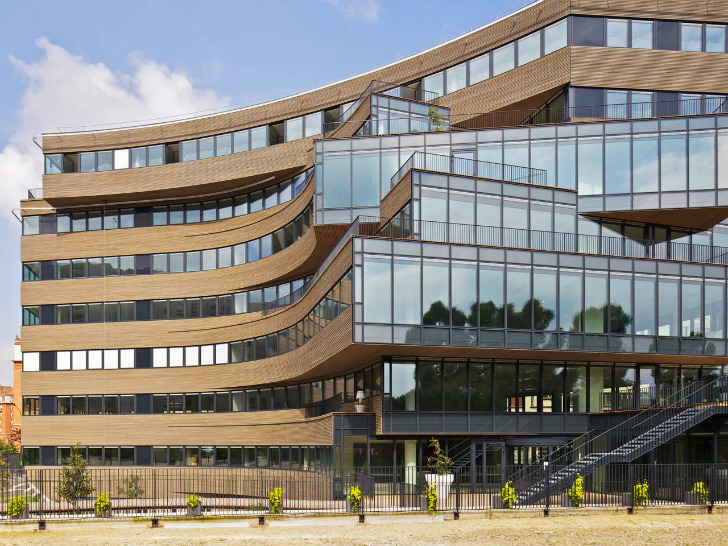 UK-based insurer Aviva is expanding its real estate investment in Paris. It has purchased one of the newest and most energy-efficient office buildings in the French capital.

The Dutch architectural design firm MVRDV designed the seven-storey development. It is the beginning of what is planned as Paris’ first eco-quarter of hyper-efficient buildings.

A large and architecturally distinctive office development that was completed in 2014 in the south east of the city, Pushed Slab has 18,300m2 of space and uses only a quarter of the energy of a typical office building.

It was one of the first Paris office buildings to be awarded the prestigious French BBC (Bâtiment Basse Consommation) energy efficiency label.

Perhaps its most noticeable feature is the vast hole in its middle. This was added by MVRDV to preserve views of a local building nearby but it also creates space for multi-level terraces and balconies, fronted by large windows. The wood on the outside of the building has been sourced from sustainable forests in France.

The Rotterdam-based firm named the building Pushed Slab to echo the way in which its volume has been “pushed until it breaks, then twisted and pushed to the south” to maintain the view to the nearby building.

Pushed Slab also pushes new boundaries in terms of energy-efficiency. It achieves this through 264 rooftop photovoltaic panels. There are also 22 solar thermal collectors, generating 45% of the energy needed to heat the building’s water, while sunshades have been integrated into the south facade to reduce solar gain.

At 56 Real Estate, we welcome the news that a major international insurer is placing its smart money on the eco-future of Paris and investing in one of the city’s first low energy buildings. We are all for a greener, urban future.