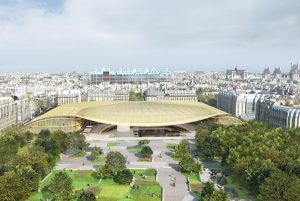 The renovation of Les Halles, the former wholesale food market, in Paris’ 1st arrondissement (district) is proceeding. The revolutionary undulating glass roof was originally scheduled for completion in 2014, but technical hitches have delayed it.  The construction of the canopy is now in its final stage.

The renovation project has been a complex one, carried out while the site was still in daily use and costing an estimated €1.06 billion. The glass canopy alone has cost €236 million to construct.

This vast makeover is one of a number that are revitalizing parts of Paris. The market itself dated back to the 12th century and gave its name to the whole neighborhood. In 1971 the old glass and cast iron buildings were dismantled and the market was moved to its current site at Rungis, outside Paris, and La Villette in the 19th arrondissement.

A new shopping center opened in 1979 but, by the early 21st century, was itself in need of a makeover, which began in 2010. The ambitious scheme includes the shopping center, the surrounding gardens and the underground Châtelet-Les-Halles metro station. The station is one of the busiest in Europe, handling around 800,000 passengers every day.

Two new buildings form part of the scheme. One will house a cultural center; the other will be a shopping complex.

Both buildings are crowned with a sail-like curved roof composed of 16,000 glass plates resembling fish scales, designed by the architects Patrick Berger and Jacques Anziutti. The canopy is 14.5m high and covers an area of almost 2.5 hectares (over 6 acres).

The roof’s yellow tone varies according to the light and the angle of vision and will filter UV rays during heatwaves. Rainwater collected in a central reservoir will be channeled into a waterfall.

Once the renovation is complete, the plan is for the shops to move in and open in January 2016. The work on the station will be complete in mid-2016.

The project is widely expected to give a boost to the Les Halles neighborhood, which is already highly sought after. During the first quarter of 2015, the median price per square meter was €9,340, according to the notaires, officials who handle property transactions. But small apartments are in short supply and you can pay €14,000/m2 or more for a studio in a prime location.