So Deliciously French, the Cinq-Mars Restaurant in Paris

So Deliciously French, the Cinq-Mars Restaurant in Paris 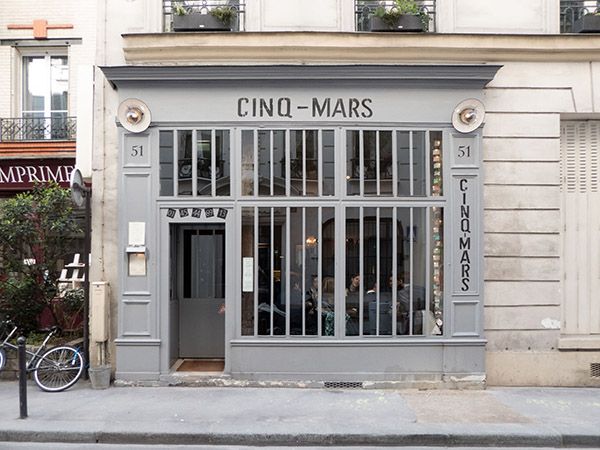 A mix of modern and retro décor contributes to the relaxed atmosphere of the Cinq-Mars restaurant. It is one of the most congenial spots on the Rive Gauche.

The eatery is just across from the offices of 56Paris Real Estate. You’ll find it at 51 rue de Verneuil.

The cuisine is heartwarming, too: whole sea bass cooked in a parcel with fennel and pastis, sausages from Conquet. There is an all you can eat version of that dependable French classic, chocolate mousse.

The perfect place for relaxed lunches and dinners, the restaurant opened in 2004. It sits behind an enormous glass window – the type you see in artists’ studios.

We went to meet Rodolphe Aubert, the manager of the Cinq-Mars restaurant. This charming Frenchman is something of a fixture there.

History of the Cinq-Mars Restaurant

A neighborhood restaurant, le Cinq-Mars is about enjoying a good meal among friends. “We don’t stand on ceremony and focus on serving dishes that are healthy, simple and unpretentious – even if we are in the 7th arrondissement (district)!” says Rodolphe.

“Many people come here to try the celebrated sausages supplied by Conquet in the Aubrac region and our homemade purée of mashed potatoes that accompanies them.”

Pascal Balland and Paul Baudaine, who launched le Cinq-Mars in 2004, renovated the site. They worked there non-stop 24/7. Even though they were having a great time, they eventually appointed Rodolphe as manager.

Despite what people always think, the name of the restaurant doesn’t originate from the date of March 5th. It actually comes from the floor tiles. They originated in a village called Cinq-Mars-La-Pile in the département (county) of Indre-et-Loire. In the 17th century, the Marquis de Cinq-Mars led a conspiracy against Cardinal Richelieu (Louis XIII’s chief minister) and was sentenced to death.

The owners chose the neighborhood because they immediately felt at home in the village-like atmosphere.

“Even so, it was a risky venture, since the street is very quiet and a bit hidden away,” says Rodolphe. “We’re at the opposite end from Serge Gainsbourg’s house, which is the part that appeals most to tourists. It was a challenge for the owners initially but now we’re always full at lunchtime and in the evening.”

People aged between 30 and 50 dine there in the evening. These are real Parisians who like good food and wine. They want to spend their leisure time truly relaxing.

At lunchtime, there is mostly a business trade. Clients come from the nearby Caisse des Dépôts (economic development office), Parliament, the National Book Center and law firms. It’s an eclectic mix of interesting people.

“I really like the peace and serenity of the street, the architecture and the location. It’s cosmopolitan while remaining cozy,” adds Rodolphe.

If you’d like to find out more about buying a home in Paris in this neighbourhood or elsewhere in the city, we’d love to hear from you.