Roofscapes and the Greening of Paris Rooftops

Roofscapes and the Greening of Paris Rooftops 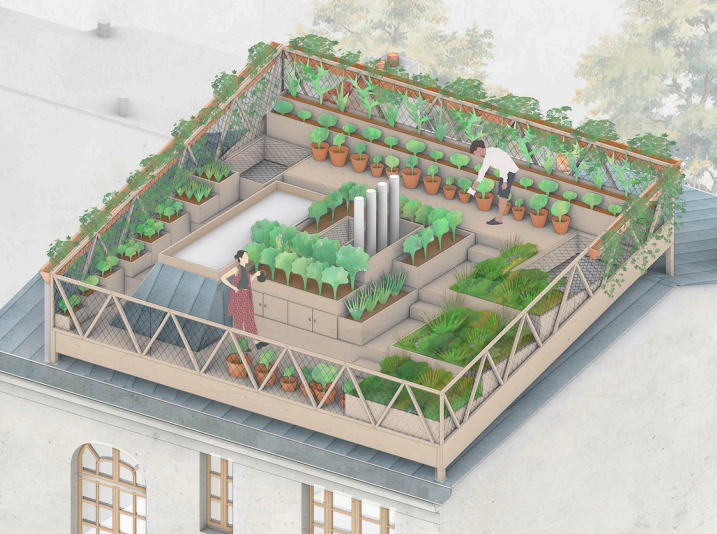 The greening of Paris rooftops is in the spotlight – thanks to an innovative new startup.

This project aims to utilize our skyline to improve air quality and lower the city’s temperatures – using the power of plants.

We look into the plans, and when we could start to see results.

A greener version of our city

Paris is infamous for its high summer temperatures, sometimes reaching 102°F in July and August. In 2019, they peaked at 108°F during a heatwave.

Of course, with global climate change having devastating effects, lowering these temperatures is a critical part of the city’s future.

For years, the Mayor of Paris Anne Hidalgo has pushed to turn Paris into a greener version of itself.

The new project from startup Roofscapes plans to help with that, but takes into account the period architecture and other quirks of our city.

The quirks of Paris

Unlike most capitals, where flat-topped skyscrapers are the norm, Paris is a city of mostly period architecture.

In fact, over 60% of all buildings are Haussmannian, dating from the 19th century.

They’re a symbol of our city, and are full of charm. But the sloping zinc ‘mansard’ roofs of many period buildings – such as this charming Alésia apartment – present a logistical challenge.

This is the challenge taken on by Roofscapes – and something they seem to have overcome with great success.

From the USA to France

Roofscapes is a startup from the MIT School of Architecture and Planning, based in Cambridge, Massachusetts.

Their concept was to use what the city already has, without demolishing buildings or constructing new ones.

They quickly realized that increasing rooftop vegetation was a sure-fire way to improve the air quality and lower the city temperature. Using digital and practical modeling, they worked over several years to refine the final concept.

Olivier Faber, one of the founders, explains “Roofs represent around 30% of the horizontal surface of Paris. A third of the city is therefore completely unused. With Roofscapes, we see roofs as an incredible opportunity to improve well-being and urban resilience.”

Taking into account the tilted shape of the Haussmannian buildings, the Roofscapes platforms sit higher at the front and fit neatly onto the existing roof.

The designers say they took inspiration from the ‘Altana’ roof gardens in Venice, Italy. These are wooden terraces used as outside space centuries ago, usually to dry clothes – now they are pleasure terraces.

Using a similar concept in Paris, prefabricated wooden platforms can be placed onto the zinc roof, which remains untouched. Instead, the platform uses the oversized load-bearing walls, which are easily able to support it.

This makes the green roofs safe, but also reversible. The integrity of the original building is intact.

Last year, Roofscapes showcased their work at the Biennale of Architecture and Urbanism in Seoul, South Korea.

It is now entering the pilot phase, so we can see it in action here in Paris.