Right Bank of the Seine Pedestrianized 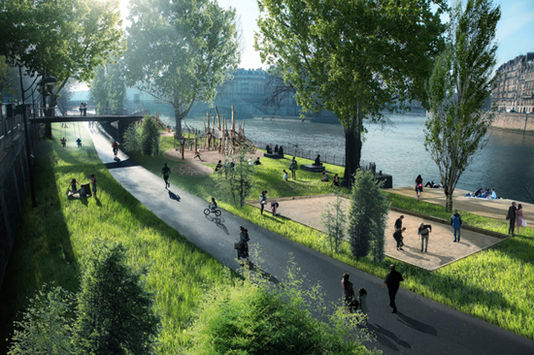 A new car-free plan for central Paris has left a large part of the Right Bank of the Seine pedestrianized.

The plan’s architect is Anne Hidalgo, the Mayor of Paris. She says the “almost philosophical project” has cut off a large section of the Seine’s Right Bank from cars. It’s part of her effort to pedestrianize and green the heart of the French capital.

In 2002, Paris started closing sections of the Seine’s quayside to create a temporary summer beach. It is complete with real sand and sun loungers and has now spread to three sites along the river. The Paris Plages (Paris Beach) scheme has highlighted how delightful the riverside can be.

In 2013, Hidalgo pedestrianized a further section of the Left Bank, which allowed restaurants, cafes and art exhibits to spring up. Cars were no longer able to travel along the 2.5km of road between the Musée d’Orsay and the Pont de L’Alma (Alma Bridge).

The tarmac was replaced by around 4.5 hectares of green space, including 1,800-m2 floating gardens. The move was welcomed by 4 million visitors in the first 18 months. It led to a 15% reduction in local nitrous oxide pollution.

Now Right Bank of the Seine Pedestrianized Too

The extension of this plan “means seeing the city in another way than through the use of cars,” says Hidalgo. It means the Seine on either bank is now enclosed in two attractive, car-free parkland buffers.

The Seine has two separate lines of quayside. One stands above the river at street level and the other is at water level, below high walls.

Its quays were transformed into motorways back in the 1960s. Parisian planners wanted new ways to speed cars into the city center and the unbuilt lower quays provided a quick solution.

How much of the riverbank highway has been closed? A 3.3km section between the Tuileries Tunnel and the Port de L’Arsenal, next to the Place de la Bastille.

In Paris, The Car is No Longer King

Municipal authorities say that driving time to cross the capital on the Left Bank only increased by two minutes when parts of it were shut to traffic.

The scheme for the Seine to be pedestrianized is partly to reduce high pollution levels in Paris. Plans to remove cars from some historic central districts are also under consideration.

The use of diesel engines is already restricted in central Paris. The city’s authorities have introduced a low-emission zone, banning trucks on weekdays. Nine new routes are barred to traffic on Sundays and public holidays. This brings the number of permanent and temporary road closures to 22.

In Sept. 2015, the French capital held its first day without cars, banning vehicles from the city center. It was a field day for pedestrians, cyclists and photographers. In Sept. 2016, the authorities extended the ban on cars and trucks to cover the entire city.

“All this is part of a comprehensive policy in which we assume deliberately that there will be fewer cars in Paris,” Hidalgo said. “So, in calculating the flow of spillover traffic, I don’t project myself into a world where there are as many cars as today.”

The use of more river-based urban logistics is set to be part of this plan. The Seine is to be used for barge container traffic to reduce the use of trucks. The renovation of Paris’ legendary Samaritaine building on the banks of the Seine is already using this method.

Reinventing Paris and the Seine

Mayor Hidalgo is also the force behind the urban design competition, Reinvent Paris. It is aimed at transforming forgotten public buildings and spaces into environmentally-friendly urban designs.

This saw international teams of architects contending to redevelop 23 sites in Paris. In 2016 Paris City Hall went on to announce Reinvent the Seine. This is a similar scheme focusing on 40 sites all along the river.

For residents and visitors to Paris alike, the plan to take back the Seine’s quayside from cars is a brave and laudable move.

The fact that Paris takes such great care to protect not just its architecture, but also its quality of life, is good news for all. Such an approach can only have a positive effect on property values too.

When part of the Left Bank of the Seine was closed for renovations in 2012, some predicted the new green spaces would drive up the value of nearby real estate. The Saint-Thomas d’Aquin neighborhood of Paris’ 7th arrondissement was already a highly sought after one.

According to the Chambre des Notaires de Paris (Paris Chamber of Notaries), property prices in this quarter today vary only slighty from 5 years ago. However, this needs to be read as positive news. The Parisian property market weathered some minor price adjustments between 2013 and 2015. The innovative installation of the promenade may have contributed to this area withstanding any potential devaluation.

It is important to note that this is only an average net-to-seller price. Outstanding high-end properties can go for much more, sometimes double the average. We are currently representing this beautiful turnkey 1 bed, 1,5 bath property for sale. It is just a stone’s throw from the Seine and its Rive Gauche promenade, across from the Musée d’Orsay.