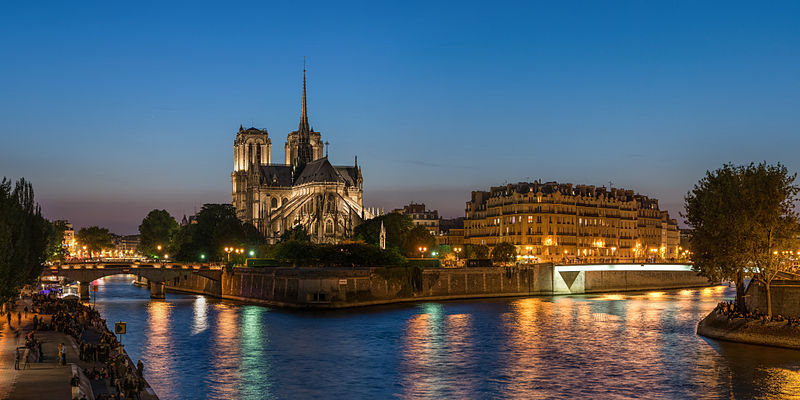 The French government is planning an ambitious renovation of Ile de la Cité, the UNESCO World Heritage site that is home to Notre-Dame cathedral.

This island in the Seine in central Paris houses mainly administrative buildings. Other than tourists passing through, it is mostly deserted at night. The proposed renovation of Ile de la Cité would transform it into a vibrant community.

The goal is to add 100,000 new square meters of living and working space. French newspaper Les Echos reports the project is likely to cost well over 1 billion Euros and reach completion in 2040.

Philippe Bélaval, the president of the National Monuments Center, says that only 300 people live on the island year round. An additional 600 live there only a few days a year. Residents are a mix of international owners with pied-à-terres and locals.

“The buildings are imposing seen from the outside but occupy only a third of the total space, comparable to that of the Louvre,” says Bélaval. This leaves room to densify the island. But as always in Paris, care will be taken not to destory the picture postcard ambiance.

“There is no school, no polling station, few shops …” says project architect Dominique Perrault. « We do not have the means to leave these places sanctuaries, we must make them live, it is the only way to protect them. »

City officials selected Dominique Perrault’s plans from among 30 proposals. “The glass is to show the stone better,” says Perrault. If realized, his plans will have the island glittering in the Parisian sunlight.

The square in front of Notre-Dame cathedral would be made transparent in order to highlight the archaeological remains below. Glass canopies would cover the courtyards of police headquarters, the Hôtel Dieu hospital and the Courthouse. A multi-level greenhouse would replace the aging flower market.

The project also includes two new footbridges linking the island to the mainland. It foresees direct access to the river on a quai just below Notre-Dame. The area would resemble a port, lined with houseboats and barges.

Where Will the Additional Space Come From?

The City of Paris and the French government share ownership of most buildings on the island. The privatization of space seems the only solution to finance such a grand project.

The French Ministry of Culture must also agree to re-designate this protected area.

The new 100k m² would come from redefining public spaces, opening passages through buildings now closed to the public, covering courtyards and above all using underground space. The plans foresee residential dwellings in a third of the old hospital and an entire block now occupied by the prefecture of police.

Shops could be established on the ground floor of buildings now reserved for administrative use. Parking lots with low occupancy rates would benefit by going underground, especially under the residential Place Dauphine.

The High Court and the Police headquarters will soon migrate to the 17th district, freeing up many square meters on the Island.

The proposed renovation of Ile de la Cité is far in the future. What are current property values on the island?

The small amount of private property changes hands too seldom to give the Paris Notaries reliable sales statistics. However, prices on the neighboring Ile St. Louis are a reliable indicator of the Ile de la Cité’s value. They increased 1.8% last year to an average of 10,800€/m².

While that figure is still 2,460 €/m² above the overall Paris average, it is relatively low for a highly desirable central area. The lack of elevators in many of the island’s 17th-18th century buildings is one reason for this. Another factor is the high percentage of properties in need of renovation. Prime properties there however, especially those facing the Seine, sell for more than 25,000€/m².

The charm of the secluded Place Dauphine and the proximity of Notre-Dame are factors in real estate values on the Ile de la Cité. A 3 bedroom apartment on the quai with a balcony overlooking the Seine recently sold at 18,000€/m².

If you are interested in owning property on this historic island in Paris, please contact us here.