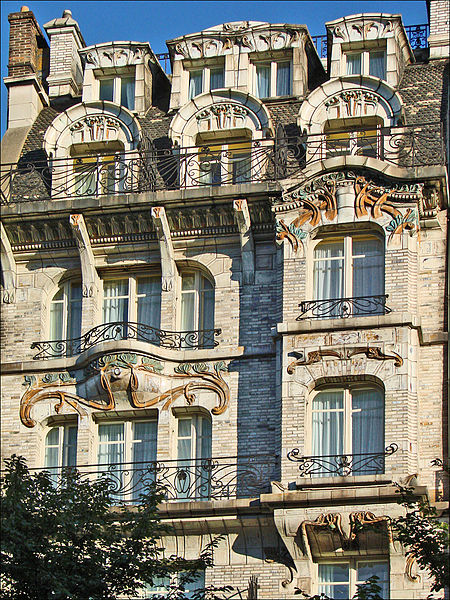 The idea of buying an apartment in a period building in Paris is very appealing. But it’s worth being aware of the pros and cons of the varied construction styles and methods that have been employed in different eras

15th, 16th and 17th centuries: plenty of charm, but sometimes the layout is not ideal

Apartments in buildings dating from these centuries are often located in former private mansions that were later divided up. They have considerable charm, with their fireplaces, beamed ceilings and original floor tiles.

The downside is that the floors above the first floor tend to have much lower ceilings. Also, the rooms often lead into one another without a corridor.

Architecture progressed from the ornate Baroque and Rococo designs of the 17th and early 18th centuries to a more pared down classical symmetry during the century. Apartment buildings started to be custom built and corridors were introduced.

Interiors were lighter, with large windows, and the practical living aspects were developed. Chimneys became more efficient, sanitation was improved and rooms were arranged with more consideration for privacy. Later in the century, the interiors became plainer and less ornate, while the layout of the rooms was more functional.

Haussmannian style buildings were constructed during this period. The interior reflects the stylish elegance of the exterior. The sought-after apartments are roomy, light and airy with spacious entry halls, high ceilings and several reception rooms. Their typical design incorporates ornate moldings, herringbone parquet floors, marble fireplaces, double doors and floor-length windows. This is the classic image of a Parisian apartment.

The floor plan of these apartments corresponded to life at the time, when the occupants had servants. The kitchen was usually situated at the back of the apartment down a long corridor, far from the dining room, which would have overlooked the street.

Some of the original apartments often had only one bathroom and WC and were so large that they have been split into smaller ones, with bathrooms added. Since Haussmannian buildings have thick walls, it’s often enough to add double glazing to make them energy efficient. But in partitioned apartments, it’s useful to verify the thickness of the walls to avoid noise nuisance.

End of the 19th century: the charm of Art Nouveau

The construction techniques were Haussmannian but with the addition of decorative elements inspired by nature.

The elevator was introduced during this period, but not all buildings had one. Most of them have had an elevator added since then, facilitated by the grand stairwells in many of these buildings. It can be more difficult to sell an apartment in a building without an elevator, especially if it is several floors up.

During the Art Deco era, geometrical shapes succeeded curves in architecture and interior decoration. The red brick apartment blocks in the outer arrondissements (districts) appeared at this time, which are considered to be models of design. They had large surface areas – 70m2 for a three-roomed apartment – with bathrooms.

1920s buildings are generally well insulated. But, once concrete started to be used, the quality decreased. Watch out for lead pipework and damp.

The construction boom of this period meant that concrete was used increasingly. The buildings are sometimes lacking in charm and the apartments densely packed.

This trend continued into the 1950s, with buildings that were not energy efficient and poorly insulated against noise. However, renovations are usually easy to achieve and the apartments are often spacious and light.

Energy efficiency was not a concern until the oil crisis of 1973. The size of apartments reduced after that, but parking spaces and elevators became virtually standard.

During the 1980s, building regulations were tightened up to include noise and heat insulation. But some buildings are already ageing badly and require considerable renovation work on the exterior.

From 2000 onwards, the drive towards much better energy efficiency and comfort has meant that modern apartment buildings are constructed with better quality materials, the kitchens and bathrooms are well equipped and the maintenance charges shared between apartment owners are less.

It’s always a good idea to find out the date of construction of an apartment that interests you. This will tell you a lot about what you should look out for.