Paris Monument History and Its Phantoms

Paris Monument History and Its Phantoms 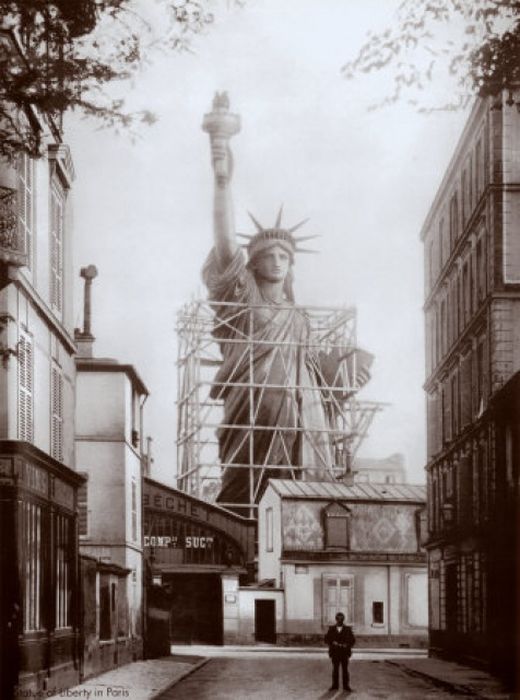 Paris monument history may surprise you. Believe it or not, this is not a photo of Liberty Island in New York… it’s actually Paris!

The history of the French capital is full of monuments that can no longer be found. These ‘phantoms’ offer a fascinating insight into the city’s past.

We take a look at some of these long-gone landmarks in historic areas, and the properties nearby that could be yours.

The phantom monuments of Paris

The Eiffel Tower, Arc de Triomphe, the Sacré-Coeur. Paris boasts some of the finest and most famous monuments in the world. But the city wasn’t built in a day, and there are many sites that have not survived.

For example, the city once housed an epic Roman arena. Ruins remain of the Arènes de Lutèce, a first-century amphitheater used for gladiatorial games. Building the Rue Monge in the 19th century unearthed the ruins, which can still be visited today.

Around the squares in Paris monument history

More recognizable today are the city’s public squares, such as the Place de la Bastille.

Shared with the 4th, 11th and 12th arrondissements (districts), it’s named after the notorious prison that was located here. A key monument in the history of the French Revolution, it’s now long gone.

The area is still worth exploring. But now thanks to a superbly modern attraction, the Opera Bastille.

Close by is this stunning Haussmannian atelier in the 12th arrondissement (district).

Another historic square is the Place du Châtelet on the right bank. This is the former home to the Grand Châtelet, a huge fortress that is also lost to time.

Today, the area is close to two of the capital’s grandest theatres: the Théâtre du Châtelet and the Théâtre de la Ville.

To be near this attractive part of Paris, this beautiful turnkey studio in the Marais is ideal.

An exception to these phantoms, perhaps, is the original Statue of Liberty.

This was never intended to stay in Paris, but was built here, as a gift to the American people from the French.

Later, it shipped across the Atlantic in huge crates. Unveiled in 1886, it came to represent freedom and hope in the New World.

But even though the original is now 3000 miles away, you can still find traces of the Parisian Liberty.

The most famous is on Île aux Cygnes, a small island in the Seine. It’s a quarter-size replica given to Paris by U.S. citizens living in Paris.

Another replica dates from the Exposition Universelle (World Fair) in 1900. For over a century, this version stood in the Luxembourg Gardens. Although it’s since been replaced with a newer version.

For properties near this area, take a look at this charming one-bedroom Odéon duplex apartment. Or for rental, this apartment housed in the building of the former Shakespeare & Co. bookstore.

Your own piece of history

Are you looking to rent or purchase real estate in Paris? Perhaps in an area close to these historic districts?

Whatever your needs, we’re here to help. Get in touch with the experts at 56Paris today for free and friendly, no-obligation advice.