Paris' Montparnasse Neighborhood Gets a Facelift

Paris' Montparnasse Neighborhood Gets a Facelift 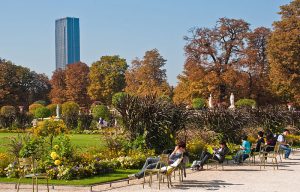 The Montparnasse neighborhood of Paris is to undergo a transformation between now and 2020. City Hall has initiated a series of urban renewal projects to achieve this. ‘We need to re-humanize the face of the neighborhood,’ said Jean-Louis Missika, the deputy mayor in charge of urban planning.

Montparnasse is a typical Parisian neighborhood on the borders of the 6th, 14th and 15th arrondissements (districts). The area is favored by couples and young families for its tree lined streets, colorful open air markets and authentic cafés that were once frequented by artists such as Picasso.

There are also some little-known gems like the Zadkine Museum on the rue d’Assas, dedicated to the graceful works of the Russian émigré sculptor, Ossip Zadkine.

Extensive construction took place in the western part of the neighborhood during the 1960s and 70s. This includes the Montparnasse Tower, which is almost universally unpopular. The station and the office buildings surrounding it are also in need of refreshing.

The first project involves modifying the avenue du Maine to fill in or reduce its road tunnel and to turn parking lots into green spaces. Another green space will be created along the center of the rue du Commandant-Mouchotte.

On the other side of the Montparnasse Tower, City Hall envisages transforming the Place du 18 Juin 1940 into ‘Paris’ Times Square,’ as Missika put it.

It’s said of the Montparnasse Tower that it offers the best view of Paris because you can’t see it when you’re at the top. A complete renovation is in the cards, including re-facing its façade.

To complete the metamorphosis, the Montparnasse train station is earmarked for a substantial makeover. And multi Michelin starred chef Alain Ducasse will open a restaurant there in 2017.

The planned improvements are likely to enhance property prices in the neighborhood. Average real estate prices in the Montparnasse section of the 14th arrondissement already increased by 4.1% during 2014 to €9,760/m2, according to the latest official figures. And you can expect to pay more on the edge of the 6th arrondissement.