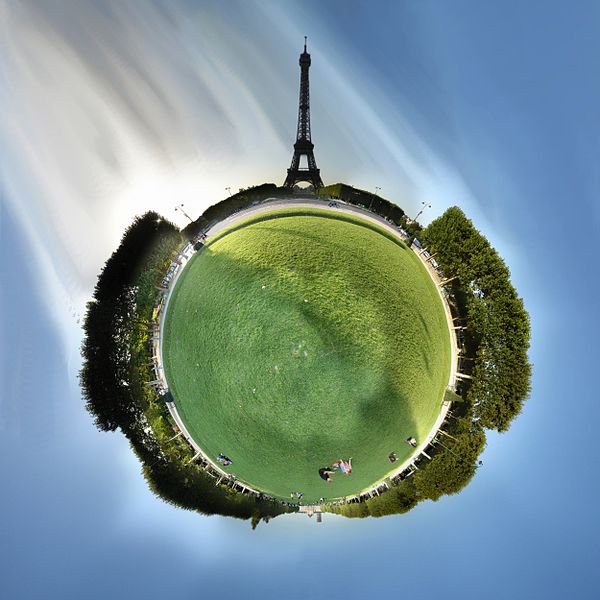 As part of her green Paris initiative, Paris Mayor Anne Hidalgo has announced that four new rues végétales (green streets) will be created in the 8th, 9th, 10th and 20th arrondissements (districts).

It was one of a series of environmentally friendly measures set out for 2016.

Further sections of the Petite Ceinture (little beltway), an abandoned railway in the center of the city, will become green spaces too.

Mayor Hidalgo has made nature in the city a priority since the beginning of her term in office. She has set a target of 100 hectares (approx. 250 acres) of rooves, walls and facades for greening by 2020.

The Champs Elysées will be closed to cars one Sunday a month to let pedestrians roam free, she said.

Other plans include permanent pedestrianization, as of summer 2016, of a stretch of busy road bordering the Seine’s Right Bank.

The news follows the staging by Paris of the UN climate conference in December. The Eiffel Tower was lit in green to mark COP21.

The historic climate pact agreed upon puts the world on a greener route. It will enable all countries to move to a low carbon pathway.

This recognizes that in the 21st century cities are undergoing profound advances. They can all play a key role in combating climate change.

The project states: “Paris is part of this drive, with a clear goal of becoming a sustainable city. It will join other committed, diverse, mixed-neighborhood and innovative cities around the world.”

In 2015 Paris received an international award for the quality and the ambition of its greening strategies.

IGRA (the International Green Roof Association) is a global exchange platform for cities and investors who want to ‘green’ their cities.

IGRA gave its Green Roof Award, to the City of Paris. This recognizes outstanding examples of green roof architecture all around the world.

Between 2001 and 2013, the City of Paris created 118 living walls. Last year, more than 21,000 Parisians also backed a citizens’ vote for City Hall’s funding of the Des jardins sur les murs (Gardens on the walls) project. As a result, 41 further walls in the city will become vertical gardens.

By 2020, over 100 acres of Paris’ rooves and facades will have been greened. One third of these will produce fruits and vegetables.

“Greening is a strong tool for fighting climate change, reducing heat islands and improving the energy performance of buildings,” said Pénélope Komitès, Deputy Mayor in charge of green spaces, nature and biodiversity. Nature “must develop wherever possible in public space,” she added.

More than 50 other types of facades will become green through the Du vert près de chez moi (Green near me) initiative launched in 2014. This invited Parisians to suggest places to City Hall that they thought would benefit from public funding to be made green, by means of window boxes, new trees, flower beds or green walls.

The creation of green walls in urban areas could cut pollution by up to 30%, scientists have said.

Researchers believe that trees and vegetation at street level can clean air in areas exposed to pollution.

Plants in towns and cities have been shown to remove nitrogen dioxide (NO2) and particulate matter. Both are harmful to human health.

These findings appear in the journal Environmental Science and Technology .

At 56Paris Real Estate, we take our hats off to Mayor Anne Hidalgo.