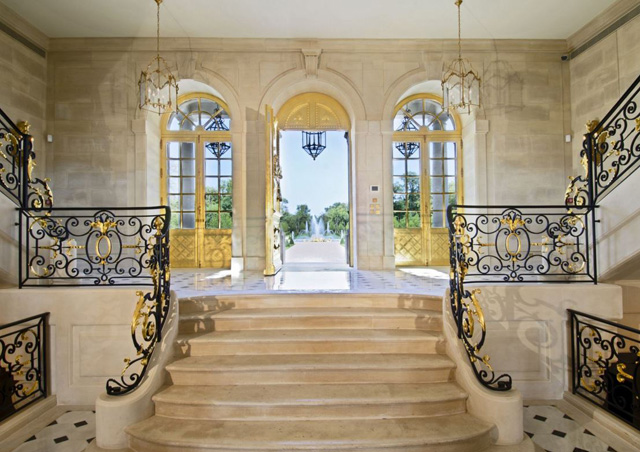 The unbeatable draw and prestige of Paris luxury real estate for overseas buyers has been underlined with the record-breaking sale of a mansion to an unnamed Middle Eastern national.

Chateau Louis XIV, modeled on Versailles, complete with gilded statues and fountains, is believed to be the world’s most expensive home, having sold for the world’s highest-ever price tag of more than $301 million (275 million Euros), Bloomberg reports.

The previous confirmed record price for a home is reported to have been set when a penthouse in London sold for about $221 million in 2011.

As reported here earlier this year, the palatial mansion, filled with Grand Siècle décor, is situated between Versailles and Marly-le-Roi and located about 15 minutes outside the Parisian neighborhood of the Triangle d’Or. It sits within a 56-acre park and blends 17th century-inspired design with cutting edge technology.

It boasts 10 bedroom suites, a grand reception room with a 52-foot-high frescoed dome ceiling, a library, a wine cellar for 3,000 bottles, and a meditation room beneath a moat that is circled by an aquarium. It also has a leisure complex that occupies a whole floor, with two mosaic-lined pools and a gym. Its own cinema has a multiplex-sized screen.

The property is so named as it is built on the grounds that once housed the Swiss Guards who ensured the protection of Louis XIV and it pays multiple tributes to France’s Sun King.

“With elegantly planted parterres, a gleaming gold-leafed fountain, an infinite array of flowers, marble statues, bridle paths and a hedged labyrinth, the property’s park and gardens evoke the genius of Le Notre,” COGEMAD says on its website, referring to the gardener of King Louis XIV of France.

Features include a 1.2-mile maze with a three quarter-sized replica of the Chateau de Versailles’ fountain of Apollo, whose statues are covered in gold leaf. The house façade even has a genuine monumental bronze and enamel clock identical to the one on the façade of Versailles.

Château Louis XIV, the height of Paris luxury real estate for overseas buyers, is the work of Saudi developer Emad Khashoggi and his company COGEMAD. It employed 200 people to spend three years building the property.

According to COGEMAD’s website, although the mansion was built only recently, the Chateau Louis XIV fulfills French standards for what constitutes a historical monument.

Certainly the design and development of the Château Louis XIV was the subject of a book published by the renowned French art magazine, Connaissance des Arts (Knowledge of Art).

In addition to the Château Louis XIV, Emad Khashoggi’s past developments include the Palais Vénitien in Cannes and the renovation of Pierre Balmain’s former apartment in the prestigious Jean Walter building complex in Paris.

COGEMAD is headquartered in Paris from where it has fashioned a new dimension of haute couture living by building “dream estates” that range from historic French chateaux to 21st century architectural masterpieces.

The company has created bespoke luxury homes throughout France, Europe and the Middle East, and each one is hallmarked by a total commitment to excellence strongly embracing architectural and artistic innovation.

At Paris56 Real Estate, we think that while the sale of Château Louis XIV is an exceptional transaction, recent figures for Paris also show that the combination of market conditions and the city’s dynamism and historic allure have led to 2015 registering a surge in growth in the luxury residential sales market.

After two years of relatively stable prices, the market has recently rallied, posting an annual increase of 15% in sales by volume (properties of €1m+).