One of Our Favorite Paris Chocolate Shops

One of Our Favorite Paris Chocolate Shops 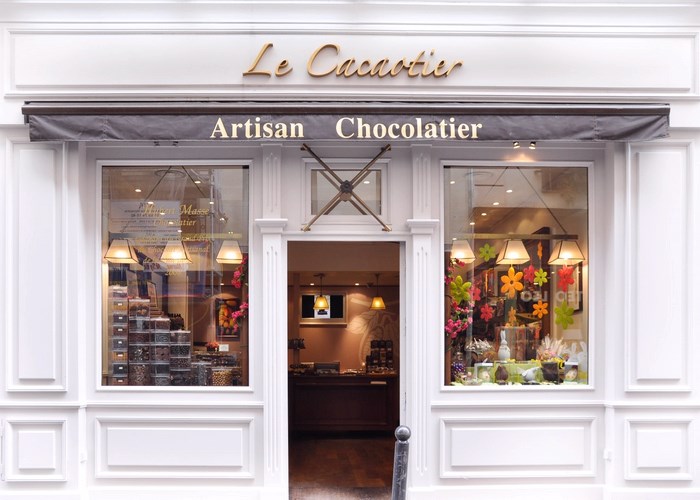 He’s the master chocolatier who in just over a decade has created an irresistible desire for his hand-crafted chocolates. So successful has been his Le Cacaotier brand, that it has expanded from one shop to an empire of seven, spread across the Paris region and beyond, with 3 in Paris itself.

You’ll find one of these toothsome establishments at 44 rue de Verneuil in the 7th arrondissement (district). It’s just a few steps from the office of 56Paris Real Estate – and yes, we’re regular visitors.

He was named as one of the Incontournables du Chocolat Français (The Ultimates of French Chocolate) at the 2014 and 2015 Chocolate Awards Ceremony, the prestigious annual event run by the Club des Croqueurs de Chocolat (Chocolate Tasters) in partnership with the Salon du Chocolat.

He was also one of the top 12 chocolatiers in France at the 2013 Paris Chocolate Fair – for the third time in a row – and gained first prize from the City of Paris in 2008.

A Frenchman, Hubert Masse worked with a Swiss chocolatier in Guatemala and also trained in London and Paris. He then went to Australia and, having fallen in love with the country, opened his first chocolate shop in Perth.

Success – and nostalgia for France – led him to open Le Cacaotier, first in Enghien-les-Bains just north of Paris in 1995 and then on rue de Verneuil in 2008, to the delight of local residents. Since then, he has opened two further Paris chocolate shops to the delight of chocolate lovers in Paris – the latest one in 2015.

“My aim is to make chocolates that are smooth and balanced, perfectly finished and presented, with a melting texture that is immediately identifiable. I constantly strive to enhance my recipes,” says Hubert.

The house specialities are a dark chocolate ganache infused with lime, citronella and honey, and gianduja (a chocolate cream) with hazelnuts from Italy’s Piedmont region. All of his chocolates are made by artisans in Le Cacaotier’s specialist atelier in Normandy.

Hubert chose the rue de Verneuil on the Rive Gauche as his first central location as he wanted to create a new outlet in a neighborhood renowned for its métiers de bouche (food specialty shops) and skilled craftsmen. His Irish-born wife Susan, who works as an interior designer, created its chic and stylish decor.

“Our customers particularly like our boxed assortments of chocolate cream-filled ganaches and pralines, chocolate bars and mendiants (chocolate disks topped with dried fruit and nuts). Apart from that, we mainly sell chocolate creations for Easter (eggs and rabbits) and Christmas (snowmen and Santas),” he says. “Tourists snap up our molded chocolate Eiffel Towers. Our Montmorency cherries are also popular: we steep them in eau-de-vie for eight months and then coat them in chocolate.”

The Pleasures of Chocolate in Paris

Every Paris arrondissement (district) is different. Hubert just loves the 7th, he says, because it’s a location that’s cool and elegant – like our products.

“We have loyal and friendly customers. You come here to buy chocolate for pleasure, so you can’t help but be charming – especially in one of the most beautiful cities in the world.”

So, our advice to all chocolate lovers in Paris? Whether your motivation is to sample their wares or to find a delicious and authentically French original souvenir to take home, find your way to Le Cacaotier on rue de Verneuil – and drop in and pay us a visit down the block.