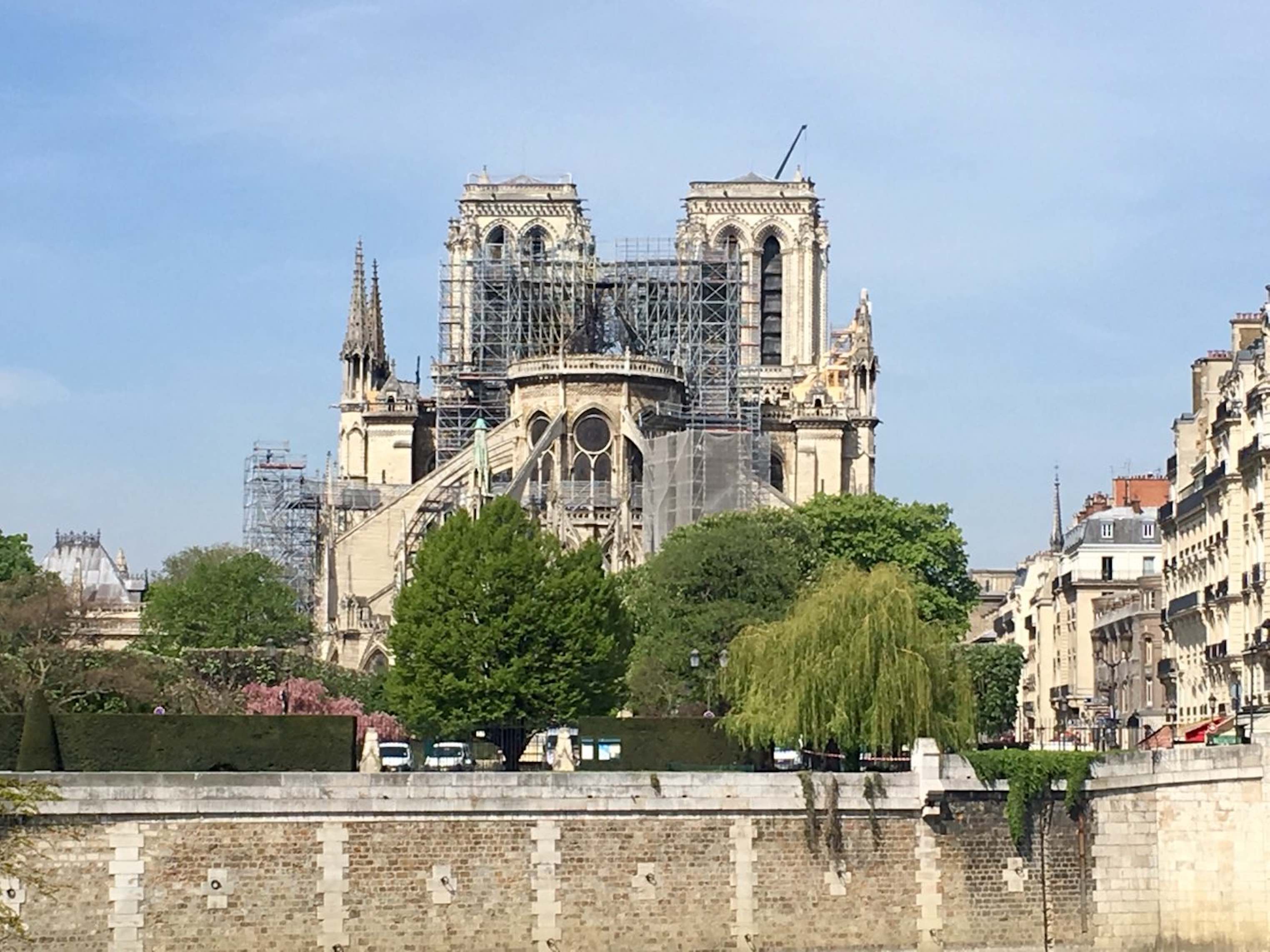 On Monday evening, the world watched in horror as Notre-Dame burned.

A true icon of Paris, we examine the history of one of the capital’s finest monuments. And we also ask what the future holds as the world awaits its reconstruction.

We look at the first reports

So what happened? It’s only been a matter of days, but early reports suggest a link with renovation work at the cathedral. This is “likely to be accidental” rather than arson.

We do know that the fire started around 6.50 pm on Monday and burned through the night. Many Parisians gathered to watch, their songs and prayers shown around the world. A pivotal moment came when the spire fell. This devastating sight touched the assembled crowd, and all those watching the world over.

In terms of damage, around 1000 m2 of the roof caved in – two thirds in total. But the firefighters saved the main stone structure, and its legendary pair of bell towers.

At the moment, public prosecutors in Paris favor the theory of an accident. They anticipate a “long and complex investigation” into the fire.

On a small island in the Seine in the 4th arrondissement (district), Notre-Dame qualifies as the most famous of the Gothic cathedrals from the Middle Ages.

The building originated under the reign of Louis VII in 1166, but wasn’t completed until 1345. That means a remarkable 183 years went into building it.

The crowning of King Henry VI of England inside the cathedral in 1431 marked one of its pivotal moments.

Modified many times over the next few centuries, ‘Our Lady of Paris’ changed, with each generation adding to the building to fit current trends.

The hunchback of Notre-Dame saved it

In the 19th century, Victor Hugo immortalized the cathedral in his book, The Hunchback of Notre-Dame.

This famous tale actually highlights the neglect the building suffered from at that time. It was due to lingering damage endured in the French Revolution some hundred years previously.

The book’s success spurred massive overhauls to the cathedral. From 1844 to 1864 it was extensively renovated. This was when the famous spire first appeared on the Paris skyline.

It’s comforting to know that Notre-Dame survived previous damage and disaster. It gives hope that it will do so again.

It will join the ranks of other cathedrals to rise from the ashes. The most famous example is Our Lady of Reims, in France’s Champagne region. This cathedral burned following a German bombardment in 1914. The site where French kings were crowned, its near-destruction was also a devastating event. But it has since been pieced back together, and exists today as a breathtaking and beautiful cathedral.

A human chain made up of firefighters, security services and even priests, evacuated many of these during Monday’s fire.

According to news reports, “the most precious treasures of the cathedral are safe.” This includes the Crown of Thorns, Blessed Sacrament, and the Tunic of Saint Louis.

Along with other items, they are being sent to the Louvre. Here they’ll go through dehumidification and restoration.

Macron makes a pledge to Notre-Dame

With 14 million visitors each year, the closing of the cathedral will leave a significant hole in Paris’s landscape of tourist attractions.

The French President, Emmanuel Macron, announced an international fundraising pledge to restore Notre-Dame. He has gone further, vowing to ensure the cathedral’s restoration within five years.

Almost immediately, others pledged to help. The richest person in France, Bernard Arnault was first to the post. Then French billionaire François-Henri Pinault, the Bettencourt family, and oil giant Total, all offering millions. At the time of writing, these pledges amount to 600 million euros.

It’s clear how much the French people cherish Notre-Dame.

Personal donations for the reconstruction

If you are looking for ways to help and donate, you will find the official Notre Dame website here.

All funds sent go directly to the cathedral.

Kerstin Bachmann, our Managing Director, adds the following: “As Parisian citizens, Monday’s tragedy struck us to the core. However sad it is, events like this strengthen our love for this city and our strong desire to add our stone to rebuild Paris, so it can keep on shining.”

If you would like to get in touch with any member of the 56Paris team, you can contact us here.