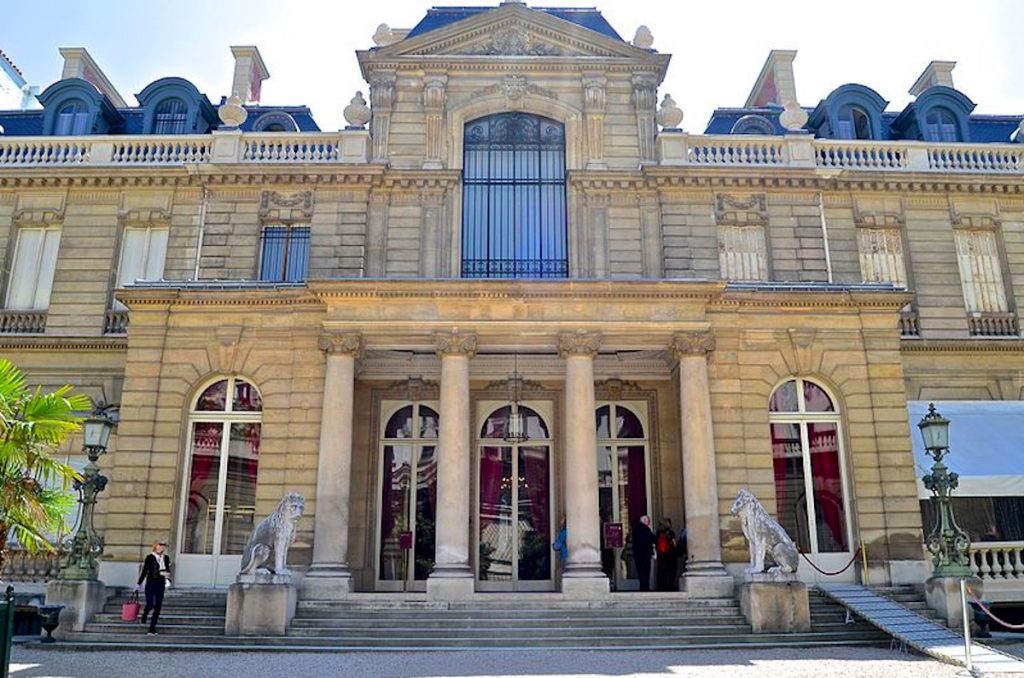 Welcome to the second part of our blog, bringing you more lesser-known Parisian landmarks.

Catch up with part one here, or continue below to discover more hidden gems in the City of Light.

All are perfect for escaping those tourist crowds and seeing another side of this stunning capital.

The secret garden of Paris

Jardin des Colonnes is not like any other city park or garden. A little off the beaten track in the city’s 14th arrondissement (district), it’s a futuristic fusion of modern and traditional.

Opened over 30 years ago, this lavender garden is the centerpiece of a circular building, surrounded by glass mirror panes.

You’ll find this ‘secret’ down Rue Vercingétorix, past a set of large iron gates. It’s a gem of futuristic architecture. Something of a rarity in Paris.

The hidden nightclub in a park

Translating as ‘Pink Happiness’, the Rosa Bonheur is an old ‘guinguette.’ Never heard of one? It’s the word for an open-air tavern, where you can enjoy dinner and drinks, then dance the night away!

To find it, head to the picturesque Buttes Chaumont park in the 19th arrondissement. It’s away from the tourist trails. Look for the pink neon sign, and prepare to party.

Or if dancing’s not your thing, you can do brunch there on the weekends. Bon appetit!

Head to the smallest neighborhood in Paris for an unusual attraction… not only one of the last remaining vineyards in the city. It’s also home to a series of beehives!

The Butte-Bergeyre garden is a micro-park at the top of Bergeyre Hill in the 19th arrondissement. To find the Clos des Chaufourniers vineyard, you’ll need to ascend three staircases in the park. A little work, but it does reward you with amazing views of Montmartre and the city beyond.

Producing a mere 100 liters of wine a year, it’s a real small-scale operation. Close by is a series of six hives, which generate around 170 kilos of honey each year.

Containing art worthy of the world’s great museums, the Musée Jacquemart-André is a real wonder of Paris. The former home of artist Nélie Jacquemart and her husband Edouard André, it’s full of rare artworks and furniture. This includes Renaissance paintings, work from the Flemish and German schools, and tapestries.

It still feels remarkably like a home, not a museum. Albeit a grand one. The 19th-century Haussmannian mansion is often called a ‘mini-Versailles;’ But without the huge crowds.

You’ll find this private museum in the 8th arrondissement, not far from the Champs-Elysées.

The museum of magic

Offering a little bit of magic in the heart of Paris, children and adults are easily captivated at the Magic Museum.

After walking around the exhibits in their cellar-like den, everyone gets to enjoy a magic show in the museum’s own vintage theater.

He was one of the greatest fashion designers of all time. And another of Paris’ lesser-known attractions is the design studio of Yves Saint Laurent.

You’ll find it upstairs, as one of his museum’s exhibits.

Surrounded by scissors, measuring tape and fabric samples, are his eyeglasses. Exactly as he left them on the day he died.

These lesser-known Parisian landmarks are just the start of the amazing attractions enjoyed by residents of the city.

Are you thinking about buying property? Perhaps to live and work, or for real estate investment?

Whatever your needs, the experts at 56Paris are on hand to help. Get in touch with the team today for free no-obligation advice.