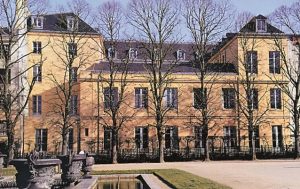 The Palace of Versailles, near Paris, is one of France’s most famous and visited monuments. Its palatial buildings, sumptuous décor and formal gardens symbolize the past glory of the Sun King Louis XIV and his successors.

Now, the king’s furniture depository at Versailles, l’Hôtel du Garde-Meuble, has been completely restored and converted into apartments. The top floor apartments have wide-ranging views over the landscaped gardens of the palace. Those on the ground floor have direct access to the Bassin (ornamental lake) of Neptune and its sculptures. The apartments have been in great demand and all are now sold.

Over the centuries, the storage and maintenance of the king’s furniture became increasingly important functions. The director of the Garde-Meuble de la Couronne (the crown’s furniture depository) had great responsibility and prestige.

A succession of buildings acted as furniture depositories. By the late 18th century, the furniture collection was so extensive that a new building, l’Hôtel du Garde-Meuble, was commissioned in 1780 to store it. Situated between the park and rue des Réservoirs, this annex was completed in 1783. It also housed the director’s apartment.

After the French Revolution, the Prefect of the Seine-et-Oise département (county) took over the building and it remained the Prefecture for much of the 19th century. It was registered as a historic monument in 1930.

The building was bought by Open Partners, a property investment group, with Ophiliam City, which funds the restoration of prestige period properties. The three-year restoration project cost €30 million.