Interview With an Interior Designer in Paris

Interview With an Interior Designer in Paris 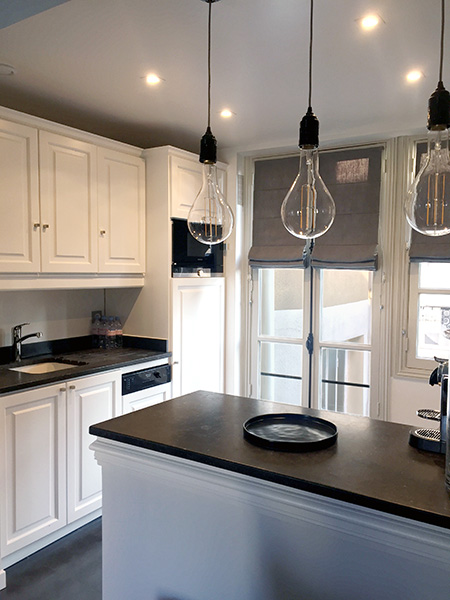 An Interior Designer in Paris can be an invaluable asset when tackling a renovation project.

In the second and final part of our renovation blog, we spoke to Ramita Philip, an experienced Interior Designer of properties in the city.

Ramita Philip was born in Iran and has lived in France for almost thirty years. After all this time she feels “like a true Parisian.”

She says, “I love the beauty of this city, its architecture and the Parisian way of life.” Her work reflects this passion, and her clients vary from private homeowners to high-end stores and boutiques.

Bringing out the beauty

One of Ramita’s latest projects is an apartment on the Rue de Lille in the 7th arrondissement (district).

“The property is from a lovely period in the 18th century. It also has a prime location in the heart of the antique dealers’ quarter.”

Was there anything in particular that attracted her to this project? “I like to bring out the original beauty of a space that hasn’t been touched in many years. That’s a big attraction. And with this apartment, the owner fully entrusted me with the renovation, and gave me carte blanche.”

Challenges for an Interior Designer in Paris

“My challenge as a decorator was to optimize the space, particularly below the mansard roof, and to fully take advantage of the triple exposure and numerous windows. The finished product, with its fireplace and two balconies, is a complete transformation from the condition we found it in.”

Were there any other challenges that appeared along the way? Ramita nods, “We also had to install central air conditioning in a relatively small apartment. To do this, we created drop ceilings, which worked perfectly.

“Also, the floors were in such poor condition that they could not be restored. So we installed new hardwood and tile flooring throughout. We used 8″ floorboards in order to create greater volume visually. Then wood panelling and paint to create the illusion of symmetrical walls beneath the mansard portion of the apartment.”

Were there any surprises, pleasant or otherwise? “Yes! The running joke among my team was the neighbor, who complained every single day about the works. This is unfortunately something that can happen despite the workers’ best intention to avoid it.

“Before starting the renovation process, I recommend knocking on neighbors’ doors and preparing them. A smiling face, telling them about the works to be done and the approximate timeline help manage their expectations and diminish their frustration.”

“It was also very pleasant to have a client from Japan” says Ramita. “Especially as they had the same attention to detail that I do. I personally have a soft spot for Japanese culture, its beauty and refinement.

“I even had the chance to meet them while travelling to Tokyo for another project. This is a rare opportunity as it helped to further understand their tastes and preferences. Agreeing on some decorative choices up front was productive and facilitated the process.”

How varied is her work in Paris? Are the design projects all very different? “I’ve worked on a variety of projects in this city, including apartments, shops and showrooms. They’re not as different as one would think, because my focus remains on aesthetics and comfort, whether it is a residential or commercial project.

And finally, what does she love about Parisian properties? “I am completely in love with the Haussmann style of architecture. There are many outstanding monuments in this city, but the Louvre museum is no doubt, one of the most beautiful places in the world. I have the opportunity to enjoy the beauty of this magical city every single day.”

Ready for your own renovation project?

If you’re interested in renovating your own Paris property, don’t hesitate to contact the experts at 56Paris for free, no-obligation advice.

And if you missed the first part of this blog, you can read it here: Renovating in Paris: A buyer’s interview.