How to Buy a Paris Apartment From Abroad 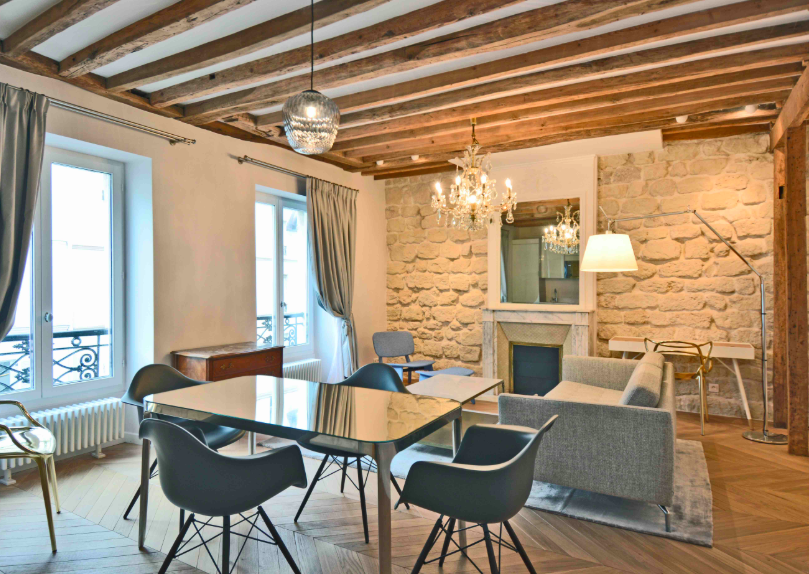 Have you ever wondered how to buy a Paris apartment from abroad? Then the positive experience of Australian couple Charlene and Dave will inspire you.

Charlene and her husband had long dreamed of owning a home in Paris. They had set ideas on what they were looking for. Did they find it? Actually, they found a gorgeous apartment that didn’t match their initial criteria at all. Yet, it’s exactly what they want…

56Paris Real Estate accompanied the Charlene and Dave in their search for the perfect Paris home. Here’s their story.

Dave is an investment banker in Sydney and Charlene works on their beef cattle farm in New South Wales. The couple, who are both in their mid-40s, have two children, a daughter aged 17, and a son, aged 20.

They’d had their hearts set on a base in Paris for many years. Although their life is rooted in Australia, they wanted to find a Paris apartment they could rent out and use for family holidays. “We’d been to Paris a couple of times as part of European holidays and fell in love with the city,” says Charlene. “Paris is a great European base.”

They appreciate the fact that Paris has such superb transport links to the rest of the continent. So they saw their new Paris home as a beautiful home base, with two purposes. They could use it to enjoy all that the French capital offers. But they could also make it a stepping off point for fresh European vacation adventures.

Great! But now, how to buy a Paris apartment from abroad?

“We had an idea of what we were looking for from a previous visit to Paris, so we searched online first,” says Charlene. Realizing what a daunting job it was, the couple then contacted 56Paris Real Estate from Australia with a clear brief.

Their dream apartment had several ‘must-haves.’ These were: an elevator, outside space in the form of a balcony and an inspirational view of a monument

. They also wanted a high floor level and move-in condition with a strong preference of the area around rue Cler. “Then we travelled to Paris. We viewed at least 12 properties, in the areas of the Marais, Saint-Germain des Près, Gros Caillou and Ecole Militaire.”

The Paris apartment that was love at first sight

Nothing, however, offered the instant ‘buy-me’ factor. Until, that is, 56Paris showed them a property precisely on rue Cler in the 7th arrondissement – one of the best and most picturesque market streets in the city. Sometimes, as Charlene and her husband discovered, you walk into a property, and you just ‘know.’

“I had many so many criteria that I was sure we wanted,” says Charlene. But all these went out of the window, she says, when she stepped inside the apartment they ended up buying. “It was definitely love at first sight. We offered the full asking price then and there,” she adds.

The couple was delighted with the property and both felt that Paris offered them great value for money: “The size of the apartment that we bought is way beyond what we thought we could buy,” says Charlene.

The lovely apartment they chose was completely different to the one they’d planned to buy. “We ended up buying a 2nd floor walk-up, without a balcony and a complete re-do,” says Charlene. “But for us, the location, size and potential of our apartment, outweighed all those aspects immediately.”

They’re now the proud owners of a stunning 67m² two-bed, two-bath. It has a large living area that overlooks the famous rue Cler market street. The building dates from 1885 but it’s not the grand sort of Parisian building they had pictured.

The remodeling of their new Paris apartment

At the outset, when they’d considered how to buy a Paris apartment from abroad, they had no intention of renovating. “It just seemed too daunting,” Charlene explains. That was until 56Paris Real Estate introduced them to an American architect they’d often worked with. He had lived for many years in France and understood what they wanted to do immediately.

They changed their minds. Seeing the potential of the space and having had the process clearly explained, they went ahead. “We were happy to proceed then,” says Charlene. “Our architect did the renovation plans, oversaw the construction and purchased the furnishing. We communicated through email, Skype and telephone conversations. He was talented and professional. He delivered us our beautiful apartment on time.” She adds: “We enjoyed working with him so much that he will be undertaking another project for us here in Australia.”

Their new Paris base is tailor-made to their needs and tastes. It’s also not far from that view of a big Paris monument they had hankered for. The Eiffel Tower is a short walk away and they can see the tip of it from the living room.

In fact, a big part of the appeal of the rue Cler area for Charlene and her husband was familiarity. On their last holiday to Paris, they had stayed on the street, not far from where they bought.

The lovely street still has its original cobblestones and is recommended by Rick Steves. He’s America’s leading authority on European travel and says rue Cler is his “favorite street in Paris. Rue Cler, lined with shops that spill out into the street, feels like village Paris — in the skinny shadow of the Eiffel Tower.”

The charms of rue Cler

“We bought on rue Cler because to us it is a wonderful part of Paris. We overlook the pedestrian street filled with cafes, cheese and flower shops, and bakeries. You do not have to leave as everything you ever wanted in Paris is right out your front door,” adds Charlene. “It is not an overly tourist area with a school at the bottom of the street making it family friendly. It has a wonderful Parisian feel.”

Rue Cler is just two or three blocks in length. But it is one of those Parisian streets that offers a little bit of everything. It has bars, cafes, bakeries, fresh fruit and vegetable vendors, fish markets, gourmet chocolate shops, and flower stands. There’s also a great choice of al-fresco restaurants so it’s full of life and color. It’s a wonderful place to sit and sip a cup of coffee and people watch.

How to buy a Paris apartment from abroad without speaking French

Neither Charlene nor Dave spoke French. But this was no obstacle to them with the help of the 56Paris Real Estate team. Throughout the process, they were introduced to a sound network of English speaking professionals, be it a mortgage or FX broker, a notaire or an architect. “It was a smooth process”, they say.

“We put an enormous amount of faith and trust in everyone throughout the purchasing process, as we don’t speak French,” says Charlene. “We discussed every detail with our English-speaking notaire and broker before the signing. Though we did have a chuckle when we were signing 30-page legal documents and not understanding a word!”

So if they were to offer any words of advice to other international buyers looking to buy an apartment in Paris, what would they be? Apart from ‘don’t have too fixed ideas about your dream property’ “The one other piece of advice we would give is to work with property brokers that you trust and like,” says Charlene. “56Paris helped us through the entire process. We would definitely do it all over again.”

If you’d like to follow Charlene and Dave’s lead or simply want to explore on how to buy a Paris apartment from abroad, you can contact us here.