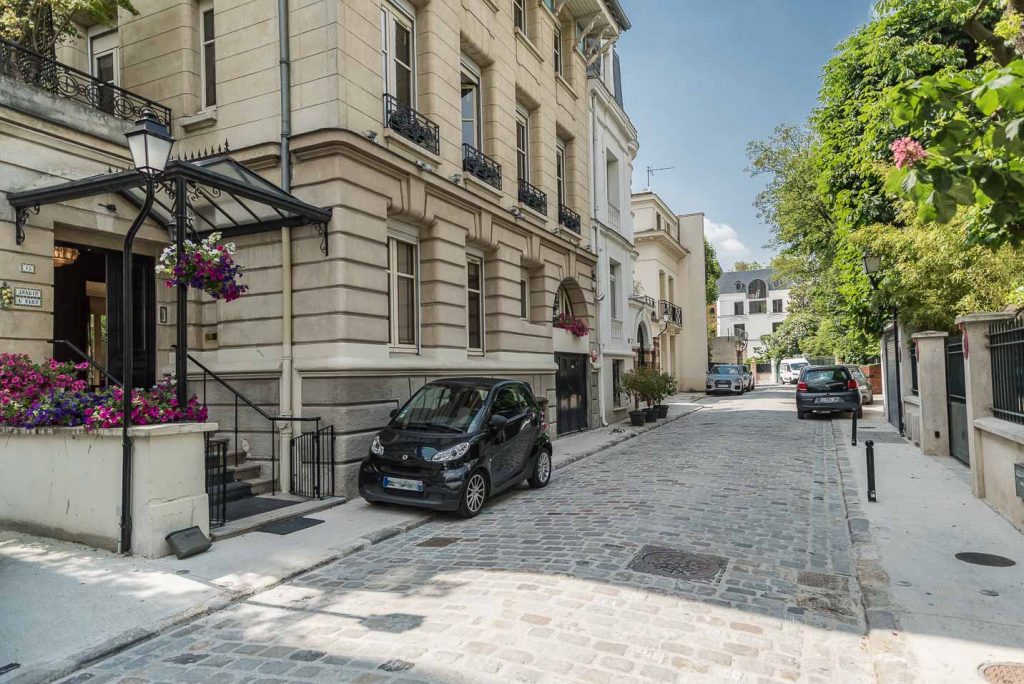 To live in an apartment is so very Parisian, you may wonder if there even are any houses in Paris!

The fact is, there are houses within the city limits. Although to live in one is a rare privilege.

In this two-part blog, we take a look at the story behind house-living in Paris, from the past to the present day.

The early history of Paris houses

Paris is a city over 2000 years old. But the oldest house to survive history is far younger than that. It’s the stone house of Nicolas Flamel and dates from around 600 years ago. Although it’s now a restaurant, not a private home.

From the early modern period, few houses survive. A famous example is the former Hôtel Carnavalet. This medieval mansion dating from 1560 is now part of the Carnavalet museum.

There’s another glimpse of historic housing in the Marais, in the 3rd arrondissement (district). The charming timbered home at number 3 Volta Street may look medieval, but is actually a replica dating from 1644.

A new era of construction begins

By the 18th century, the population of Paris grew to 600,000 inhabitants. This made it one of the most populated cities in the western world.

To house them a new era of construction began, continuing in earnest for the next century. It averaged 250 new houses each year from 1821 to 1850.

This includes the villas of Passy village in the 16th arrondissement, homes that still exist today.

But change was coming. And was going to alter the houses of Paris forever.

The rise of Haussmann

The name Haussmann is synonymous with the Paris we know today. Known as “The Demolisher”, from 1853 he destroyed around 20,000 old buildings, making way for his new vision.

Of course, many family houses vanished, but they were replaced by larger more ornate buildings with wrought iron balconies. Beautiful buildings that now typify the City of Light.

But under Haussmann’s redesign, single-family houses did not disappear completely. As the city grew and spread outwards, it absorbed some of the surrounding villages on the city outskirts.

These became the 18th, 19th and 20th arrondissements. Because of their history, they retain a village-like atmosphere, still seen today in areas such as Montmartre.

As Paris entered the 20th century, the way of living in the city changed yet again. Look out for part two of this blog, coming very soon.

Your own Paris home

For a house currently for sale in Paris, we currently have for sale a townhouse with an impressive limestone facade. Located off Avenue Foch in the 16th arrondissement, the air conditioned property with elevator offers a private garden, terrace, swimming pool, gym and sauna.

Looking for your own Paris home? Whether it’s a chic apartment or indeed, an individual house, we can help.

So why not get in touch with the team at 56Paris today? Experts on all areas of the current property market, they’re on hand to offer free, no-obligation advice.