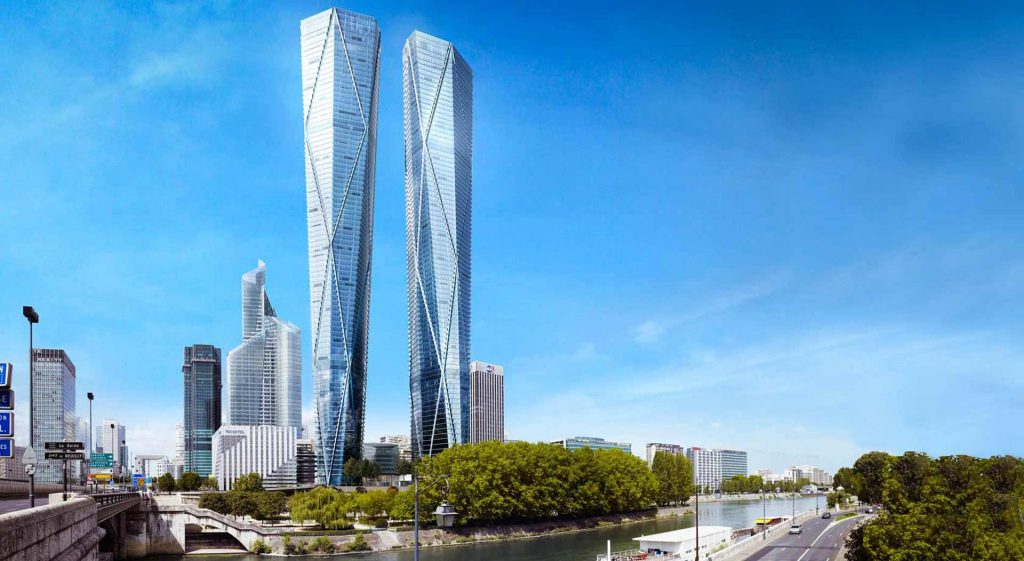 The futuristic towers, to be glass-clad and pyramidal in structure, will measure 320 meters in height. Just a few meters short of the Eiffel Tower, they will be the tallest multi-purpose buildings in Western Europe, higher than both London’s The Shard and Frankfurt’s Commerzbank Tower.

Respect for the Eiffel Tower

The company behind the project, Hermitage Group, said the planned height for the towers was deliberate, as it “wanted to respect and give credit to its prestigious predecessor [the Eiffel Tower], not to dispossess its record.”

Work on the distinctive 85- and 86-storey Hermitage Towers is scheduled to begin in 2016, with completion by 2020.

French real estate developer Bouygues SA is investing in the €2.9 billion project in La Défense, alongside the majority investor, the Russian developer, Hermitage.

Hermitage Plaza is a mixed-use project consisting of a podium and six buildings, including the two towers.

It is situated in Courbevoie, just across the River Seine from the suburban district of Neuilly-Paris. It will comprise luxury serviced apartments, a five-star palace hotel, class-A offices, high-end retail, and public and entertainment space.

A Play of Light

Enclosing a public plaza, built on a crystal-shaped foundation, the Hermitage Towers will face each other and offer fabulous views over the capital. Their crystalline forms will reflect the sun, casting brightness on the surrounding buildings throughout the day with changing patterns of light.

Their height and distinctive design means they will be visible from all across the capital, just as the Eiffel Tower is.

“The Hermitage Plaza will glorify the greater Paris skyline and offer a new lifestyle 24/7/365, with a prestigious address on the banks of the Seine, overlooking Paris, the City of Light”, Hermitage Group said.

“Living in one of the panoramic apartments with a marvelous view over Paris will come with numerous advantages (five-star room service, two floors dedicated to the thalassotherapy center, spas and swimming pools, fitness center, and more) as well as conference rooms, guest rooms, club facilities, etc.”

With a park built at its base, Hermitage Plaza will make the river banks accessible to pedestrians while bringing new life and color into the La Défense business district.

The towers will also be energy efficient, with high-tech insulation and solar shading, as Foster + Partners have implemented a series of passive and active environmental strategies aimed at achieving an Excellent rating as part of the international BREEAM sustainability certification .

Eiffel Tower: Forever to the Fore

Parisians are famously not keen on high-rise buildings in the centre of their historic capital. Paris56 Real Estate welcomes the fact that these unique towers are to be located outside the city centre and that they will not eclipse its Grande Dame en Fer (Grand Iron Lady), the Eiffel Tower, which so defines the city’s skyline.