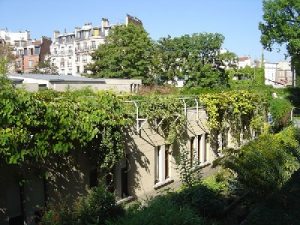 Ambitious projects are afoot to green up entire apartment or office buildings in Paris. But the city also contains many small spaces that lend themselves to improvement. They have been the target of a scheme launched by the City of Paris in July 2014.

‘Du vert près de chez moi’ (green spaces near my home) invited Parisians to identify such micro-spaces in their neighborhood and to suggest projects to enhance them. Around 1,500 suggestions were received. Of those, the City has accepted 209, having originally planned to put 200 into effect.

The proposals were judged according to a variety of criteria, including technical feasibility, the number of people who would benefit and the diversity of projects and locations.

The 209 projects that have been accepted include installing flower troughs or containers, greening up walls, putting in new flower borders, planting around existing trees and planting new trees. The aim is to bring nature into public places that are not existing parks, gardens and woodland. A quarter of these spaces will be tended by Parisians themselves.

City Hall has published an interactive map on its website showing the location of all of these spaces.