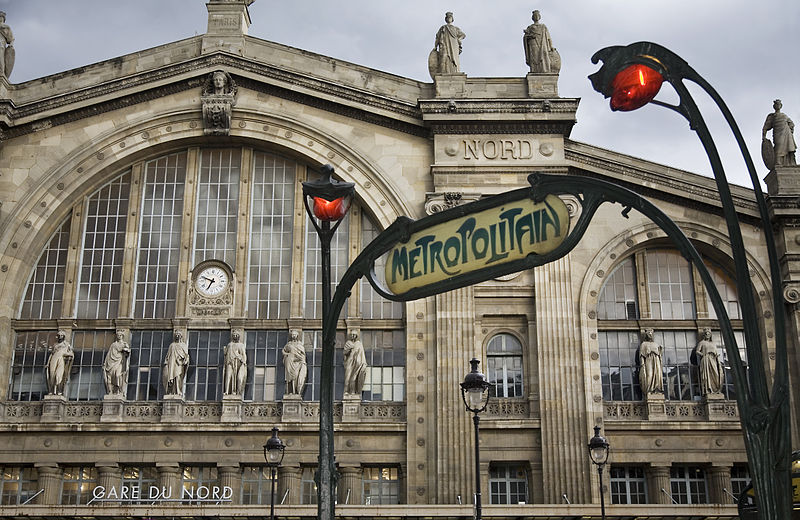 A multi-million euro plan for Paris’ Gare du Nord renovation is expected to deliver much welcomed improvements to the 10th arrondissement.

The oldest train station in Paris, the Gare du Nord has a distinctive and ornate stone façade. It is a national heritage site and it first opened to the public in April 1864.

The terminal is the Eurostar hub of Paris. It serves over 700,000 passengers a day via 2,100 trains and is the busiest in Europe.

The historic building has changed little over the past 150 years. But the station’s interior has undergone repeated renovation to meet the demands of rising traffic.

It remains crowded, though, and jammed into a space that is too small for it. The challenge for today’s planners is to expand and modernize the station within its small footprint, without affecting its unique architecture.

The Gare du Nord’s impressive facade was commissioned by James Mayer de Rothschild. He was the chairman of the Chemin de Fer du Nord railway company. It is the work of the celebrated French architect Jacques Ignace Hittorff.

The building is designed around a triumphal arch and features 23 statues representing the cities served by the company. The most majestic statues crown the building and illustrate international destinations (Paris, London, Berlin, Warsaw, Amsterdam, Vienna, Brussels). National destinations appear as more modest statues lower down on the facade.

The Gare du Nord renovation is a project that has been compared in scale to the £800-million renovation of King’s Cross St Pancras, the Eurostar hub for London.

Completed in 2007, this project included a new terminal for St Pancras International for Eurostar services to continental Europe. It prompted a significant boost to property prices in the area.

A recent SNCF presentation revealed plans to redevelop the station and its surrounding area over the next eight years.

Mayor of Paris Anne Hidalgo believes the redevelopment will “anchor the placement of the station within its neighborhood.” The work will be in two phases, with completion due in 2023.

The first phase includes renovation of the existing buildings and expansion of the space available for Eurostar services to London. There will be new mezzanine waiting areas above the tracks and a new business class lounge. This phase also includes the refurbishment of the underground four-track RER station.

This first phase should be completed by 2018. The second phase will see the construction of a new mainline departure hub on the eastern side of the station. This will be above ground level, on pillars, with direct access to international services below via escalators.

It will house a large retail area and provide direct access to the bus and taxi platform, which will become a new entry point into the station.

SNCF, the French state railway company, announced its plans to transform the Gare du Nord in June 2015. This may well be a strong factor behind the recent property price rise in the neighborhood.

The Chambre des Notaires de Paris (Chamber of Notaries of Paris), the French officials who handle the real estate sales, have revealed that there was a 2.5% increase in prices in the 10th arrondissement of Paris in the fourth quarter of 2015.

The Gare du Nord renovation is an exciting project that, as King’s Cross St Pancras showed, is likely to have a positive effect on real estate values in the surrounding area. The 10th arrondissement, in future, will be one real estate investors in Paris may well want to watch.