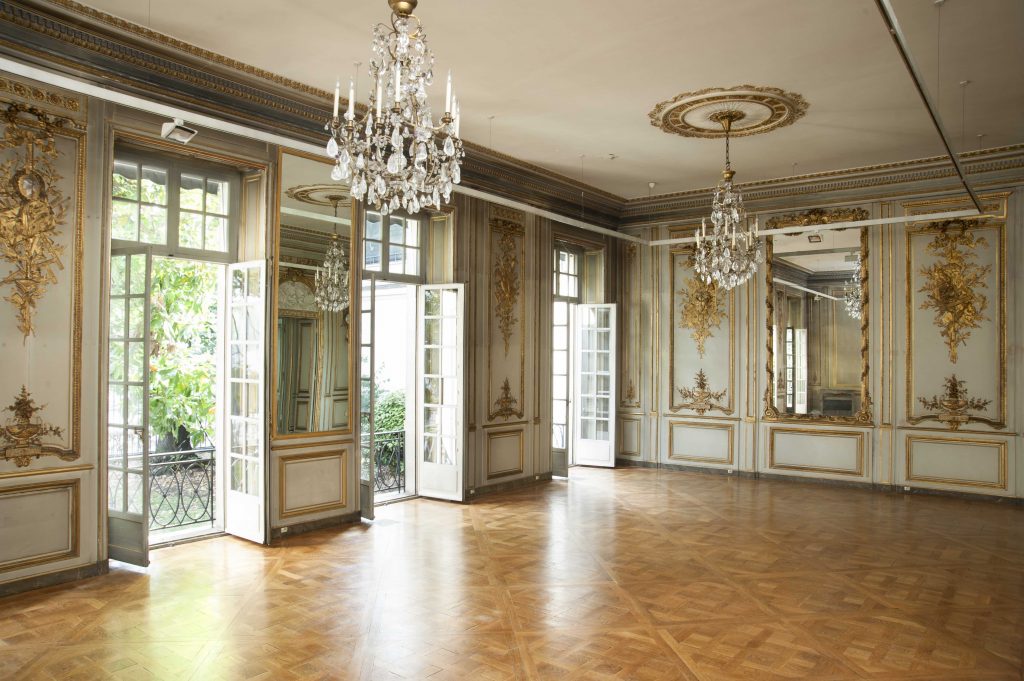 An elegant 19th-century hôtel particulier (private mansion) recently marked its 30th anniversary as the cultural home for Americans in Paris. It faces the Eiffel Tower and offers unrivalled views of the Seine.

The house was a gift to the city from the American society heiress Mona Bismarck. Mona was famous as the “best-dressed woman in the world.“ She occupied the property from the mid-1950s until her death there in 1983.

The gorgeous neo-classical building is today the Mona Bismarck American Center for Art and Culture. It sits, appropriately enough, on a very American avenue of the capital: Avenue de New York.

Mona Bismarck (1897–1983) left her lovely Parisian townhouse and the majority of her estate to her Foundation. This was formed in 1986 with the purpose of fostering French-American friendship through art and culture.

In fall 2016 the center celebrated its 30th birthday. For the occasion, Adam Gopnik, celebrated writer of The New Yorker and connoisseur of French culture, hosted an exclusive evening. Gopnik is the editor of the Library of America anthology Americans In Paris.

Today, no. 34 Avenue de New York is one of the loveliest private houses remaining in the capital. Stepping inside is a delightful and sumptuous journey back in time.

Mona – The Muse of Many

Mona Bismarck (née Strader) was legendary for her beauty, elegance and style.

In 1926, she married Harrison Williams. He was one of the wealthiest men in America and she entered the most exclusive social circles in New York. This gave her the opportunity to display her style and elegance. In 1933, Molyneux, Chanel and other leading figures of French fashion named her “the best-dressed woman in the world.”

Following Williams’ death in 1953, Mona became a countess. She married her longtime friend, Count Edward von Bismarck. Edward was the grandson of German Chancellor Otto von Bismarck. They set up home in the lovely private mansion she found at 34, Avenue de New York.

Her circle of friends included European nobility, politicians, artists, designers, actors, and writers. She was regularly featured in newspapers and magazines, especially Vogue. Famous photographers, including Steichen, Horst and Cecil Beaton queued up to photograph her. Salvador Dalí painted her portrait. Cole Porter included her name – Mrs. Harrison Williams at the time – in the lyrics of his song Ridin’ High.

Mona took fashion seriously. When Balenciaga’s fashion house closed in 1968, it is said she took to her bed for three days.

French fashion designer Givenchy once gave a colorful snapshot of her. He said: “She was splendid as could be seen in the portrait that Dalí had painted of her. She had seduced five husbands. She was mad about pearls and brought them in kilos during cruises in the China Sea and the ports of Japan. She had two lifts of different speeds installed in her home in Avenue de New York. The faster one was for the domestics so that they could reach the landing before her to open the door.”

Promotion of American Culture in Paris

Mona’s appreciation of all that is fine in life lives on today at her Mona Bismarck American Center. It is the only institution of its kind in France. The center is a cultural home for Americans in Paris, with a large supportive community of Parisians, Americans and other expats.

Its mission is to “actively engage international audiences in a compelling dialogue with American culture of the 20th and 21st centuries through exhibitions, public and educational programs and artists’ residencies.”

If you’re in Paris, we recommend a visit to this unique center. There’s always something to enjoy with its ever-changing and broad cultural offering of arts, cinema, dance, concerts and exhibitions. You’ll also be able to appreciate the beautiful architecture and décor of the splendid townhouse in which it is housed.

The mansion that houses the Foundation will clearly not come up for sale in a foreseeable future. Were it on the market today, Mona would have made a very good buy. Its real estate value would be eye-watering. In addition to its many charms, it is nestled in an exclusive residential area and overlooks the Seine.

Prices in the Chaillot area of the 16th arrondissement (district) currently average €9,600/m2. But a unique mansion with the pedigree and luxury of this one would command far in excess of that figure. It would be hard to put a price on its almost 1,000 m² of interior space and over 400m² of garden.

Have a look at this stunning multi-million Euro property that recently sold in the neighborhood. A more recent construction, the strong selling points here were its Eiffel Tower views and its large rooftop terrace.

If you would like to learn more about buying a home and living in Paris, you can contact 56Paris Real Estate here.