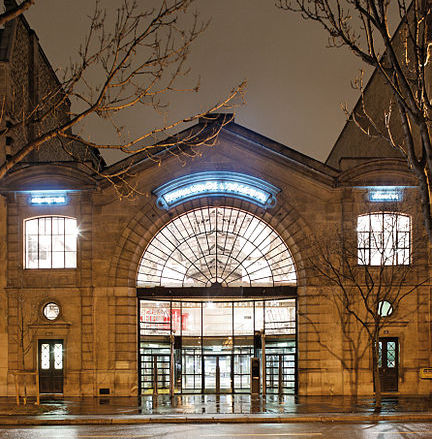 Paris La Métropole et ses Projets (Paris the Metropolis and its Plans) is on display at the Pavillon de l’Arsenal.

This is an information and exhibition center focusing on the urban planning and architecture of Paris and its urban area. It’s housed in an impressive 19th-century building occupying the site of a former gunpowder factory. You’ll find it in the Arsenal district, not far from Place de la Bastille.

In 800m², the exhibit teaches you about the past, present and future of the Paris metropolis. It achieves this through over 1,000 archive documents, photos, maps and films.

Its central space is filled with a technological first. There’s an interactive 37m² digital model of the capital that lets visitors view the city in high definition.

If you visit the exhibit, you can now use this exciting technology to summon up an aerial view of a specific place. This could be your street in your own arrondissement (district). You can ‘tour’ your area in real time – and get a sense of future plans for your Paris neighborhood.

There’s also a vast plaster model of Paris built on a 1/2000 scale in the 1990s to add context to your viewing.

Paris Urban Development Over the Centuries

Signs (in French and English), illustrations, maps and models also illustrate how Paris has evolved since the Middle Ages. They explain too the urban planning decisions made in the 19th and 20th centuries to shape the contemporary city. A section is also dedicated to the current projects in Paris and its suburbs.

Its curators say: “Our key mission is to explain the architecture of the city, its development over the centuries, its present state and prospects for the future, as well as to present to foreign visitors the urban expertise of Paris, its architects and contractors.

A recent special exhibit called Reinventer Paris (Reinventing Paris) showcased the 23 winning designs of the innovative urban design competition organized by the Municipality of Paris. This is aimed at transforming forgotten public buildings and spaces into environmentally-friendly urban designs.

We at 56Paris recommend a visit to the Pavillon de l’Arsenal if you’re thinking of buying a Paris home or already the owner of one. The exhibition gives you a great sense of each neighborhood, its future development and history.