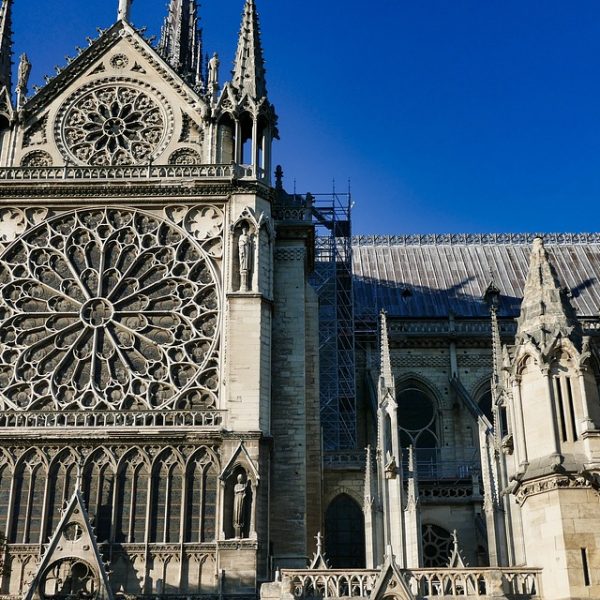 Welcome to the second part of our blog, taking you on a tour around the literary haunts of the Rive Gauche (Left Bank)

You can read the first part here, or continue below to discover more legends from Paris’ vibrant history.

We continue with Ernest Hemingway, and the first of several homes occupied by this iconic American writer.

Hemingway and his wife Hadley existed in a simple set up. They had no running water and lived through hard times with very little money.

The apartment features in A Moveable Feast, one of his most popular books.

Today, a commemorative plaque outside says, “Such was the Paris of our youth, at the time when we were very poor and very happy.”

But the Hemingways didn’t stay this way.

After finding fame and fortune, Hemingway divorced his first wife and soon married his mistress Pauline.

Moving from a now demolished building on the Rue Notre-Dame des Champs, the new couple relocated, upgrading their living quarters to an altogether more upmarket apartment at 6 Rue Férou.

Living in this property put an end to the writer’s Bohemian lifestyle. It’s near the Musée du Luxembourg, in the pricey Odeon district of the 6th arrondissement.

Living in a little hotel close to the Luxembourg Gardens, William Faulkner stayed in the Hotel des Principautes-Unies from the summer of 1925 until Christmas that year.

Winner of the Nobel Prize for Literature, Faulkner is one of the most celebrated writers in American literature. His famous works include The Sound and the Fury and The Reivers, a winner of the Pulitzer Prize.

Speaking of the Luxembourg Gardens, they’re close to another literary landmark.

Today it’s a private building, but if you’re lucky the gates will be open and you can catch a glimpse of the courtyard beyond.

It’s here she held her famous Saturday evening salons, entertaining other icons from Gauguin and Ezra Pound to Ernest Hemingway, and even Picasso.

Of course, Pablo Picasso is better known as a painter, not a writer. But we feel he still belongs in this company.

He did, in fact, write poetry, an occupation he took up at the age of 53. And he was quite prolific, writing hundreds of poems and even two plays.

Picasso’s art studio is at 7 Rue des Grands Augustins in the 6th. He lived here for 20 years, completing his masterpiece Guernica, and weathering the Nazi occupation of Paris.

Plans are underway to preserve the studio and open it to the public.

The original Shakespeare and Company bookstore

Paris is famous for its bookstores. Shakespeare and Company, one of the most famous, existed close to the Odéon Theatre at 12 Rue de l’Odéon. It was run by American Sylvia Beach.

Many of the literary legends frequented the store. As one of the few shops selling only English-language books in Paris, the attraction is clear.

Hemingway borrowed books from the shelves. While James Joyce held his launch for Ulysses here in 1922.

We actually have a one-bedroom apartment to rent, located in the original building. Its unique location in Paris’ most sought-after 6th district makes it the perfect pied-à-terre.

Long gone from the original building, the bookstore still operates at 37 rue de la Bûcherie, in the 5th arrondissement.

Buying your own Paris property

This ends our literary tour of the Left Bank. But of course, it’s a tiny part of the culture enjoyed by those living here in Paris

If you feel inspired to buy your own piece of Rive Gauche real estate, 56Paris is here to help. Parisians ourselves, we are passionate about all aspects of our local property market.

Please don’t hesitate to get in touch with the team today, we’re delighted to help.

Photocredit for both images - Unsplash