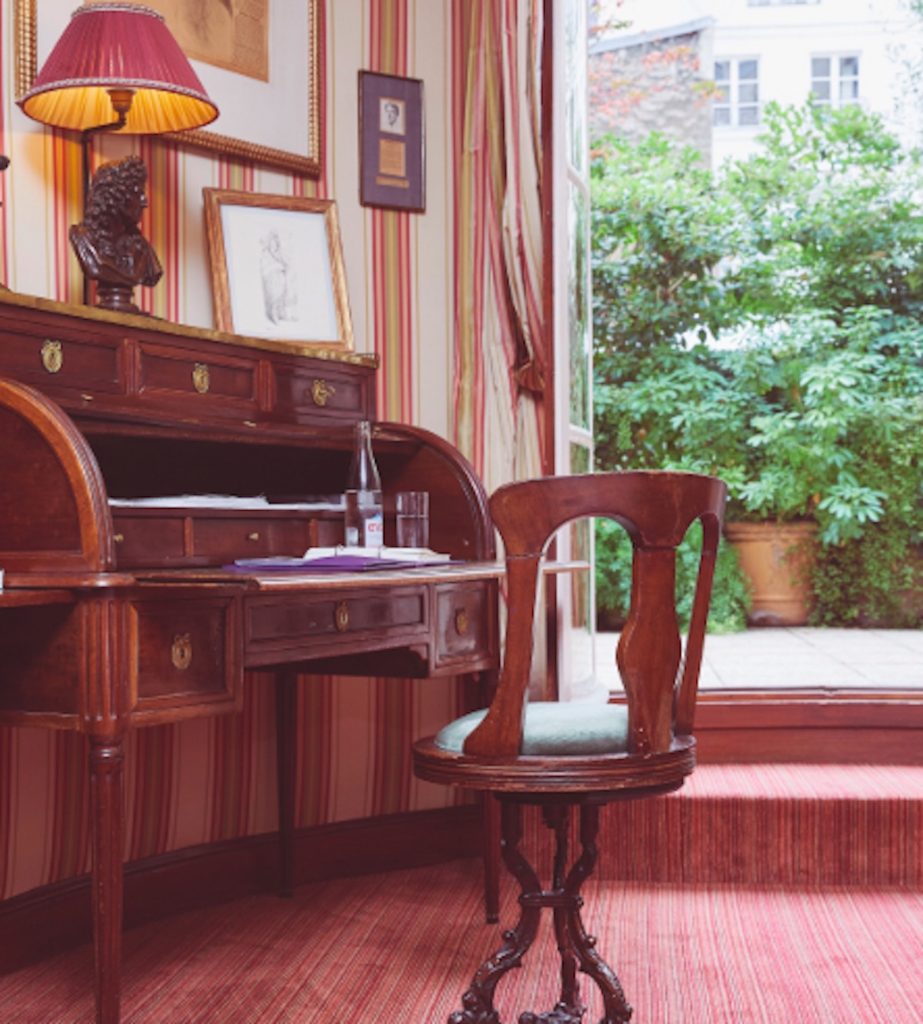 The term ‘Rive Gauche’ (‘Left Bank’) conjures up images of a golden age. The time when Paris first welcomed the crème de la crème of the literary world.

Ernest Hemingway, James Joyce, Gertrude Stein. All lived and worked in this part of Paris. And all left their mark on the city.

Most of the properties where they lived and worked are still here today. So join us for a literary tour of Paris real estate. Where these writer ‘ghosts’ linger in a variety of cafés, apartments, and hotels.

Irishman James Joyce is famous for his Modernist poetry and novels such as A Portrait of the Artist as a Young Man.

It’s fair to say he loved Paris, but he also liked to move around. In fact, one could say he took his own literary tour of Paris real estate. He lived at 13 different properties around the capital.

His courtyard apartment at 73 Rue du Cardinal Lemoine was the prettiest. Set in the 5th arrondissement (district) close to the charming Place de la Contrescarpe, Joyce finished his book Ulysses at this address in 1922.

It is his seminal work, and today a plaque outside the building commemorates its writing within the walls.

In 1933, when Eric Blair published his first book. Called Down and Out in Paris and London, he chose to use the nom-de-plume, George Orwell.

And that’s the name that has gone down in history.

It’s safe to say that Orwell’s time in Paris was not a happy one. He spent time in a hospital, suffered malnutrition, and had to sell his clothes to eat.

While working as a dishwasher, he lived in the Hotel des Trois Moineaux at 6 Rue du Pot de Fer in the 5th. At the time it was a cheap boarding house.

Now the area is prosperous, and buzzing with restaurants, boutique hotels, and lovely apartments. Like this one for sale, set around the corner from the Botanical Gardens.

Those ‘down and out’ days are in the past.

The world’s most famous Beat writer, Ginsberg made history with his poem Howl.

Together, the literary pair would frequent the Gentilhomme bar, down the street at 28 rue St-Andre des Arts.

Today the Relais is still informally known as The Beat Hotel, due to its associations with the Beat movement.

A top-floor garret around the corner at 39 Rue Descartes is the former home of the French poet, Paul Verlaine.

A heavy drinker and drug user, he died at age 51, leaving behind a wealth of ‘decadent’ and lyrical poems.

The ground floor of the building is now a restaurant called La Maison de Verlaine, in honor of the poet.

His garret room was later used by Ernest Hemingway. Although he never actually lived here, as the plaque (incorrectly) states outside. But more about Hemingway later.

Crossing into the 6th arrondissement along the Rue Bonaparte is the Hotel St-Germain des Prés.

One of the famed former residents of this 18th-century townhouse is another American: Henry Miller.

Like many writers of his generation, Miller lived in abject poverty. But he saw his circumstances as an important asset to his creativity.

Miller lived for almost a decade in Paris, writing about his experiences in the book Letters to Emil. He later released his groundbreaking novel, Tropic of Cancer. Published in Paris, it was famously banned in the USA.

As part of our real estate portfolio, we have a one bedroom Rue de Verneuil apartment, set just a couple of blocks from this location.

Legendary Irish writer Oscar Wilde spent his final days at the Hotel d’Alsace. He died there in November 1900.

Set on Rue des Beaux-Arts in the 6th, this literary landmark is now a 4-star hotel called simply, L’Hotel.

It claims to be the world’s first boutique hotel and has a suite named after their famous former resident.

Although the toast of the London literary scene, Wilde was no stranger to Paris. He was a regular, and something of a celebrity, at the Café de Flore on Boulevard St Germain.

His final resting place is one of the most striking graves in Paris’ renowned Pere Lachaise cemetery.

These literary properties are just the start of the historic attractions enjoyed by Parisians.

Are you thinking about buying Paris real estate? Perhaps to live and work, or to make an investment for the future?

For advice on all aspects of buying and selling property in the French capital, our experts are on hand. Get in touch with the 56Paris team today and find out what we can do to help.

In the meantime, look out for part two of our literary tour of Paris real estate, coming very soon.