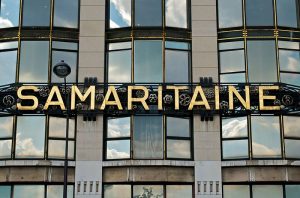 After much legal wrangling, France’s highest administrative court has ruled that renovation work can resume on the former department store, La Samaritaine.

Known affectionately by Parisians as “La Sama”, the store was one of the most famous in the world. It occupies a prime site in Paris’ 1st arrondissement (district) near the Pont Neuf. The main building is a gem of Art Nouveau architecture.

The French luxury goods brand, Louis Vuitton Moet Hennessy (LVMH), bought the five-building site in 2001. For safety reasons it was closed to the public 10 years ago. LVMH intended to transform the main building into a five star hotel facing the River Seine. It also planned a shopping center and luxury apartments.

The plan went through several revisions and was finally approved in 2012, on condition that it included public housing and a nursery. The controversy arose over the proposal to redevelop one of the buildings fronting rue de Rivoli and give it a modernistic, undulating glass front.

Local residents and heritage preservation groups objected to the design, claiming that it clashed with the classic 18th and 19th century style of the street. A French court revoked one of the planning permits in May 2014. Work was provisionally resumed in fall 2014, but the appeals court upheld the judgment in January this year and work ground to a halt again.

LVMH appealed to the Conseil d’Etat, France’s equivalent of the Supreme Court, which ruled recently that the plan was acceptable. Work will restart soon on the €460 million project.

The original plan was to re-open La Samaritaine in 2013. The legal wrangles have pushed this back until at least 2018.