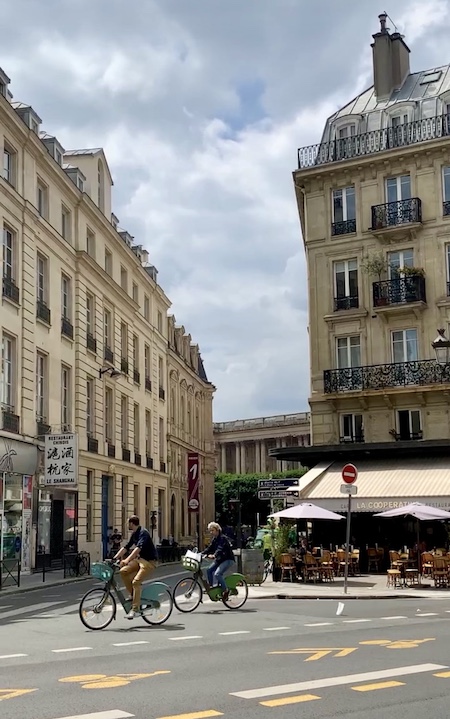 Steadily growing in popularity in recent years, the ‘15-minute city’ concept which originated in Paris has won a prestigious award.

This green, CO2-reducing initiative has many advocates, most notably the Mayor of Paris Anne Hidalgo.

We take a look at the theory and its progress in the French capital.

The 15-minute city is a concept, but one that could become a reality.

Suggested by Sorbonne professor Carlos Moreno, it promises a ‘return to the local way of life.’ The core idea is to design, or redesign, urban areas so that most day-to-day activities are accessible without traveling too far from home – under 15 minutes away by walking or cycling.

The urban-planning concept also encourages working from home, or closer to home, reducing the need to commute.

The recent confinements during the Covid-19 pandemic have led to a boom in home working. This has accelerated the latter part of the concept. It may even have helped to push it into reality.

Overall, the theory suggests that a 15-minute city not only benefits the individual with reduced stress and a greater sense of wellbeing. It also has a wider impact on the city itself, reducing CO2 emissions and pollution.

Earlier this year, the concept won the prestigious Obel Award 2021. This recognizes architectural contributions to human development, and has brought the theory to the forefront again.

Supported by the Mayor of Paris

In 2020, the 15-minute city concept in Paris was a large part of Anne Hidalgo’s successful re-election campaign.

Called the ville du quart d’heure (quarter-hour city) she suggested that urban planning in the future could give Parisians everything they need on their doorstep. She referred to it as an ‘ecological transformation,’ reimagining the capital into a series of smaller neighborhoods.

The Mayor suggested the creation of mixed districts would improve the overall quality of life for both residents and tourists. She said, “Independent, lively, vibrant… Paris is a city unlike any other. It is capable of inventing a new history without forgetting its past.”

A big part of the concept is drastically reducing the use of cars, along with public transport such as taxis, buses and trains.

As expected, the concept is not popular with everyone, and has plenty of critics.

Is the 15-minute city concept in Paris here already?

Perhaps there are parts of Paris that are already a successful ’15-minute city.’

Since the first Covid-19 lockdown, Parisians have taken to their bicycles. For many, it’s another positive outcome from the pandemic.

While it’s always been easy to walk around central Paris, driving across the capital by car is now considerably slower, thanks to new cycle lanes and pedestrianization schemes.

For a city so dense – 20,300 people per square kilometer compared to London’s 5,700 – it does still retain elements of a village in many ways.

For example, apartments in Paris rise up to seven stories above shops and restaurants, often around a private courtyard in the center. These period properties are not like others in other major capitals.

Other traditions in Paris include the principle of ‘cultural exceptionalism,’ which treats culture differently from other commercial activities. This has helped protect the city’s 3,500 independent bookshops from free-market forces.

Also, you still see Parisians heading home with their much-loved baguette in tow. This humble bread is currently nominated for the UN Intangible Cultural Heritage list, which aims to safeguard valued traditions.

All these show that while urban, Paris does still preserve its village like character.

Along with the possibilities of the 15-minute city concept in Paris, there are other ways the capital is enhancing its ‘green’ credentials.

The C40 Cities Climate Leadership Group is “a global network taking urgent action to confront the climate crisis and create a future where everyone can thrive.’

They have encouraged Paris’s plans to introduce the 15-minute concept globally, and to bring it to life.

But Paris is leading the way in the C40 city network with a number of other green plans. These include the new Paris Climate Plan, promising a carbon-neutral city by 2050.

On a smaller level, many properties are introducing eco-friendly measures, from solar panels to green roofs.

Another eco-trend is to use the Paris Urban Heating Company (CPCU). This delivers hot water directly to apartments from a central network, using greener energy sources.

The 56Paris team are here to help

Or if you would like to speak to a member of our team, please contact us and we will be happy to assist you.