11 Facts You Need to Know: Your Guide to Paris' Arrondissements

11 Facts You Need to Know: Your Guide to Paris' Arrondissements 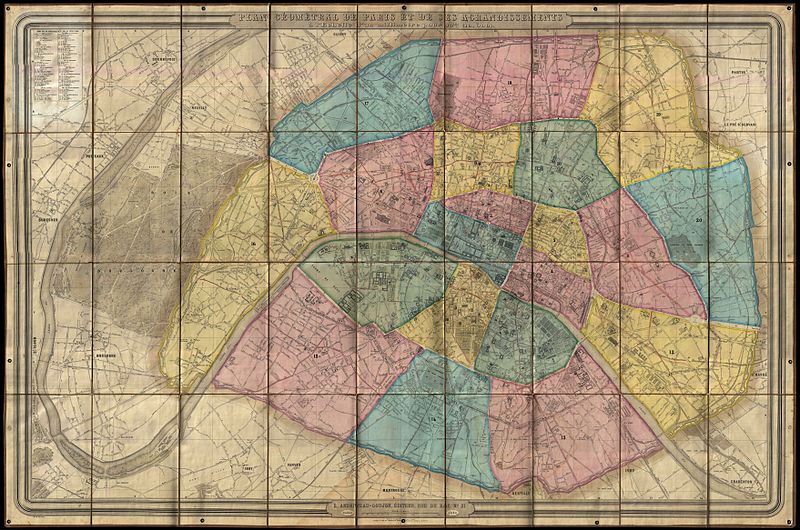 In our guide to Paris arrondissements, we explain why the boundaries have changed so little for over 150 years and how they are made up today.

Paris Mayor Anne Hidalgo recently caused controversy when she said she wanted “to reinvent Paris” and have its internal boundaries redrawn so that its arrondissements were closer to each other in population size.

There is some logic to the Mayor’s proposal, but if it goes ahead, it would be mean a major shake-up, not least a psychological one for Parisians, many of whom feel it would put Paris at risk of losing its identity.

1. How Many Arrondissements Are There?

The arrondissements are Paris’ administrative districts, equivalent to US boroughs, although they are generally far smaller than their US equivalents. Paris has 20, numbered 1st to 20th. They define the city and are often referred to as the ‘20 little cities’.

2. What Powers Does Each Have?

Each arrondissement has its mairie (city hall) with limited power. The zip code combines the city number (75) with the arrondissement number. For example, 75004 is the 4th arrondissement of Paris, home to the Place des Vosges in the Le Marais neighborhood.

3. What is the History Behind Them?

The current division of 20 arrondissements took place during the time of the reconstruction of Paris under Baron Haussmann in the mid-19th century. The 20 districts of today were defined in 1860 when Haussmann had new territory brought within the city borders, including villages around them.

4. Why That Snail Shape?

The word arrondissement comes from the French verb arrondir (to encircle). The arrondissements are numbered in a ‘snail shell’ shape. Paris chose this spiral pattern when the districts were increased from 12 to 20.

5. How to Navigate the Spiral?

The arrondissements spiral out from the western tip of Île de la Cité in the centre of the city, running in a clockwise direction until the 20th hits the eastern boundary of the city. The first to fourth form a tight central swirl around which the others coil outwards. This can be confusing as you might expect the 16th and 19th to be nearer to each other than they are to the 1st, but they are located on opposite sides of the city, with the 1st in the center.

Original plans for right to left numbering (with the 20th arrondissement being the furthest west) were apparently rejected because it would have seen the wealthy inhabitants of the current 16th living in the 13th. This caused objections because of an old expression ‘se marier à la mairie du 13e’ (to get married at the town hall of the 13th) which meant ‘living with a partner to whom you were not legally married.’ After controversy, the 13th was allocated to the south east of the city on the left bank which then was a cholera-riddled slum.

Which is the Greenest?

The biggest arrondissement in area is the 16th, which measures 7.8 km2 (16km2 if you include the Bois de Boulogne), while the smallest is the 2nd at just under 1km2.

How are they Divided?

Each arrondissement is sub-divided into four quartiers (quarters), each with its own name. The 1st, for example, is made up of the Place Vendôme, Palais-Royal, Les Halles and Saint-Germain L’Auxerrois quartiers.

Which Arrondissements Vote How?

Politically, there is a left-right divide in Paris. The arrondissements on the left of the Paris map (west) tend to vote right and those on the right (east) to vote left. The better-heeled, more traditional arrondissements to the west tend to vote for the center right and those on the east, with their more working class populations, vote socialist.

Where Does Money Talk Most?

The 16th is home to the largest number of millionaires while the wealthiest arrondissement on average is the 7th. In the 7th, the average salary is highest at €94,000 a year. The 18th arrondissement has the lowest annual average wage of €31,500.

Which Offers Most Space To Breathe?

The geographical organization of Paris neighborhoods may seem a little complicated to begin with but to most visitors and residents, it quickly becomes second nature. Armed with the information above, you’ll know where you are in no time (plus have plenty of fascinating facts to share with others!).